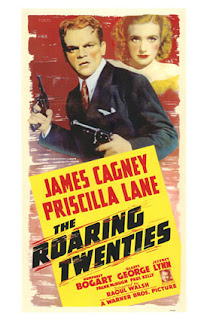 During Word War I, auto mechanic Eddie fights together with the cynical George and the young college graduate Lloyd. Upon returning back to New York, Eddie has trouble integrating back to society since his old job is already taken. He visits Jean, the girl who cheered him when he was on the front, but is disappointed when he realizes she is only a teenager. When he delivers an alcoholic drink to Panama, a sly woman, he gets arrested because of Prohibition, but she bails him out of jail and he quickly joins their crew. By smuggling alcohol, he becomes rich and meets his old friend George, teaming up with him to smuggle together and double cross the alcohol king Nick. Eddie also falls in love with Jean, but she leaves him for Lloyd. After the end of Prohibition, Eddie looses all his money and is degraded to a taxi driver. When he hears Lloyd is threatened by George, he enters his hideouts and shoots him, dying in his getaway.

"The Roaring Twenties" is an excellent film about organized crime during the Prohibition that tackles a lot of issues and manages to fulfil them, displaying the rise and fall of a war veteran, Eddie (great James Cagney), who became a mobster just to survive in his town that was crippled by the high unemployment. Even though it's not as good - or as tough - as Cagney's similar film, the classic "The Public Enemy", "Twenties" have a very fine line of skill and quality from authors that knew exactly what they were saying, talking about gangsters but also displaying a clever shift in portraying their personal lives, all enhanced by the good old-school of film making, and filled with many clever moments: for instance, in one scene Eddie is angry when he hears the people from whom he buys alcohol from have raised their price, so he simply decides to become "independent" and make his own alcohol drinks in his bath tub (!), while in another one he decides to employ two men who already have previous experience with crime, but rejects an honest man because he wants people of steel.

One simply has to mention Humphrey Bogart in, for him, a very untypical supporting role as the evil bad guy George who loves to double cross everyone and be in the middle of critical situations - in one scene, while they were robbing alcohol drinks from a state run storage, Eddie warns George: "With that gun of yours, you'll end up on an electric chair!", while he flat out replies to him: "And you will be sitting right on my lap!" Even though it has a rather naive exposition that explains too much, the story is otherwise very good, showing really bitter messages but remaining tame even in it's violent parts, making it today suitable for a universal audience despite it's theme because it cared more about real substance than some shock elements that would just keep the viewers' attention.