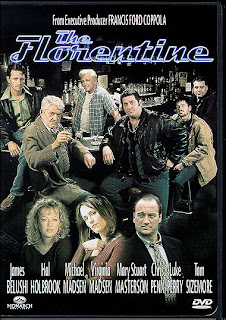 A small factory town in Pennsylvania is home to many sad people. The blond Whitey inherited the bar Florentine full of debts from his father and fights to save it: luckily, the friend of his father gives him 11.000 $ he won from betting. His sister Molly marries Jack. Ex boxer Bobbie produces counterfeit money to pay his debts off, but it doesn't work and his girlfriend, Nikki, leaves him. Small Trubby searches for love in all the wrong places and thus proposes waitress Claire who rejects him. Frankie plays pool and doesn't have any money, but then criminal Billy shows up and offers him a profitable business idea if he brings him 2.000 $. Frankie takes the money from Whitey for the wedding, but luckily Bobby gives him the money back and the wedding does take place.

Not all independent films are a treat. "The Florentine" is a neat, proper and decent episodic drama but entirely uninteresting and sadly without many highlights, thus aligning only as a unbounded artistic film, in which it's interesting to note that director Nick Stagliano gathered almost every "second class" actor available in order to draw parallels with the hapless and unsuccessful protagonists they play. Still, even though they are not big movie stars, many of the actors are really good and have talent: almost every scene James Belushi is in, playing the amusing double-crossing duper Billy who says such lines like these: "I played pool so good people thought I was Christ!", is interesting because it captures the attention of the viewer, but many actors are sadly underused, there are too many characters present, the amateurish tone is sometimes noticeable while the depressive atmosphere seems rather bleak. Only some gloomy elements are good, like some occasional unpredictability or stroke of genius that sparkle in the otherwise monotone story.