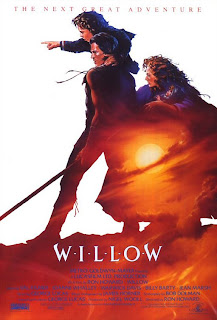 Willow; Fantasy, USA, 1988; D: Ron Howard, S: Warwick Davis, Val Kilmer, Joanne Whalley, Jean Marsh, Patricia Hayes, Billy Barty, Pat Roach, Gavan O'Herlihy
In some fantasy world, evil witch Queen Bavmorda orders a murder of all the newly born babies because one of them could, according to a legend, become a threat to her, but one infant gets saved when it gets found in the river by the dwarf Willow. Since now his village is in danger, Willow decides to take the baby away and deliver it to the first human, setting. He finds a swordsman, Madmartigan, and frees him from a cage, starting a journey together with two inch high people. When the evil Sorsh joins them on the good side, they manage to defeat Bavmorda, while Willow is on his way to become a great magician.

High budget fantasy picture-book "Willow", based on a story from George Lucas, didn't have success at the box office, which goes to the contribution of the mixed plot that steals a lot of elements from the story of Moses (a baby gets saved from a slaughter ordered by the evil tyrant by getting placed in the river), J. R. R. Tolkien (the dwarf hero might be a copy of his "Hobit") and "Conan", amateurish and chaotic ambient and dirty events. It's not true that many borrowed and constantly used archetypal events and characters can be needless, but in "Willow" they are not handled in an satisfying way - the dwarf actor Warwick Davis is sympathetic as the main hero, but Val Kilmer is entirely primitive as the wild swordsman, Ron Howard's directing skills are just suited to please the quick standards for the mainstream audience, the "gags" are mean-spirited while some fantasy sequences created with the help of special effects are rather disgusting and may cause some viewers to turn their heads away, like the scene where the troll transforms into a two-headed dragon or when people start to get transformed into pigs. Obviously, despite great technical aspects, there wasn't much spirit in the film, even though time passes quickly, yet the authors should have used fantasy to also try to describe their characters and make them interesting. In the end, despite a lot of events and happening, "Willow" is just one of those unusual films where the posters are much more interesting than the story itself.
Grade:+
Posted by Marin Mandir at 1:12 PM