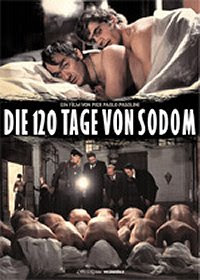 Salo, Italy, World War II. Four Fascists; the Duke, the Bishop, the President and the Magistrate, order their soldiers to randomly capture numerous young guys and girls on the street. Out of that bunch, the Fascists pick out 9 guys and 9 girls and bring them to their isolated mansion. There they force the youngsters to various perversions for their pleasure: rape, orgies, decadence, coprophagia, weird stories of old prostitutes...In the end, those teenagers who didn't comply fully get summoned to a yard where the Fascists kill them in brutal ways, all the while observing them with binoculars from a distant window.

The last film from director Pier Paolo Pasolini, anxious allegory "Salo or the 120 Days of Sodom" is considered by many to be one of the most shocking and controversial movies of the 20th Century since it seems like a "pornographic Schindler's List" that breaks almost every taboo of what can be shown on film, but the director has a beautiful shot composition that seems like a sharp contrast to the ugly events in the story and thanks to his "Pasticchio" montage he manages to direct it elegantly and unpretentiously, even deliberately artificial at moments to ease the harsh material. Pasolini went so far with his story about perverted Fascists torturing teenagers that gay innuendo and rape almost seem like the most benign of appearances, ultimately causing a large part of the audience to either call him a brave genius or a crazy lunatic, thus every sequence is more shocking than the last, from the one where the Fascists announce to the youngsters in the backyard of their mansion that they will just live for their perversions, through a girl who is ordered to piss into the mouth of the Duke up the terrifying scene where the Duke defecates and orders a crying girl to eat his excrement. Here and there Pasolini eases the depressive atmosphere with light black humor, like in the cynical scene of the gathering of the kidnapped teenagers where one henchman of the Fascists proudly says how he caught one boy: "I've waited for whole two weeks to ambush him!", yet as the story progresses it becomes more and more deadly serious, and even the humor is just there to enhance the claustrophobia.

The whole film works on at least three levels. Since Pasolini was a devoted Communist, the first one is his obvious reoccurring theme of the Bourgeoisie exploiting the Proletariat, and since his four main protagonists are just named "Duke", "Bishop", "Magistrate" and "President", it's obvious he meant to warn and criticize against juridical, religious and political oppression that take ones freedom away. The second one is the old saying that "Power corrupts and absolute power corrupts absolutely", and every fibre of that message is sensed in the film, especially when it is often implied that the four wealthy Fascists have become so spoiled that they even don't find it strange to entertain themselves with torture and degradation of others. Sadly, when one looks at many dictators and autocratic countries today, from Burma to North Korea, or the past, like Khmer Rouge's Cambodia, who constantly oppress their own citizens, one gets the point. The third one is the bitter notion that some people are evil and only feed off the passivity of their henchmen. Pasolini is obviously a person who is disappointed by life and is ready to deconstruct it to the point of Dada: such direct approach and honest analysis of injustice is truly rare. This is one of those films that are frankly ungradeable: the first half is excellent, but as the second one starts it goes more and more overboard, which was the point, and it's definitely a pity the 18 victims, 9 boys and 9 girls, have been left without characterization and act only as extras, as well as any absence of hope of the pessimistic mood. It's a brave, cult achievement, but it's so disturbing it's actually hard to digest.