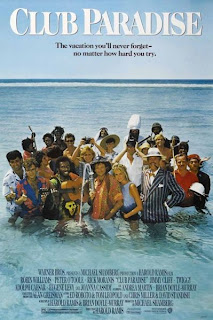 In order to escape from his monotone life, firefighter Jack Moniker leaves Chicago and leaves for a small Carribean island, Saint Nicholas. Together with his friend Ernest, he opens a tourist agency, "Club Paradise", and quickly gains his first customers, often eccentric people, like teenagers who are searching for drugs or a married couple searching for new partners. When Jack lands in prison he realizes a rich developer wants to expell his business from the island, using even troops from the local prime minister Solomon Gundy, but thanks to the Governor Hayes "Club Paradise" remains in business.

Director and screenwriter Harold Ramis crafted an equal number of popular and unnoticed movies, but even in the latter category, in which "Club Paradise" definetly belongs to, he managed to create a few really clever gags resluting in not your avarage run-of-the-mill comedy for the masses. Still, "Club" is a weak films non-the-less that seems more like a TV sitcom than a special story worthy to be on the big screen, where even puppets would radiate more character development than the thin characters presented in the film. Ramis didn't allow Robin Williams to go overboard with his manirism, creating a rather solid comic performance, yet it's obvious the whole film was just made to cash in on the "Animal House" trend of light, rude comedies for the wider audience, which is one of the reasons why the often scenes of nudist beaches can't be quite appreaciated, and the biggest surprise is Peter O'Toole who at moments seems like he came from another film. It's an aritficial, episodic and not that inspirational, but still a neat and solid fun.