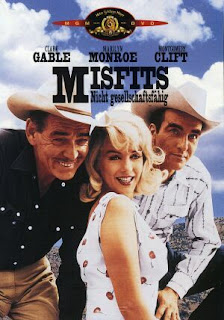 The blond Roslyn leads the older Isabelle as a witness in the court against her ex-husband. Later the two of them meet two resigned outsiders, cowboys Gay and Perce, in a bar and decide to leave with them to Nevada. There they settle in an old house where there is no electricity while Gay and Guido fall in love with Roslyn. On their way to a rodeo they meet Perce who gets injured after riding a wild bull. While Roslyn nurses him, he falls in love with her. Gay, Guido and Perce bring Roslyn with them in a truck to demonstrate how they catch wild horses, but she gets shocked upon finding out they are selling them as dog food. Gay releases the horses and leaves with her.

Pessimistic elegy "The Misfits" combines modern elements of western with modern drama and a love triangle, traversing into, for Hollywood, untypical bitterness, but the film still remained famous for the fact that it contained the last roles of famous stars Clark Gable and Marilyn Monroe, both of whom died after the film was finished, the one aged 59 and the other 36. Director John Huston once again shows his sharp directorial skills and inflicts a lot of courage for such a story back in those days, like when it is found out that Roslyn worked in a striptease bar, even though that is never shown, or when Gay - and the camera impersonating his subjective point-of-view - observes her butt while she is riding on a horse. Also, the screenplay creates a dark antagonism between the resigned Gay and the naive, romantic Roslyn who towards the finale even protests because the old cowboys are catching horses in a valley in order to sell them as dog food, which results in philosophical dialogues ("Sometimes you start doing something with good intentions, but then it turns into something bad") and the transformation of the male hero. Huston's skills combined with the dark screenplay all lead to a satisfying movie experience that somehow didn't get remembered as a classic it was intended to be.