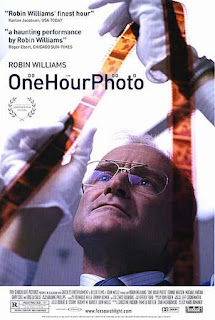 Sy Parrish develops photos at the "SavMart" one-hour photo store. He is a lonely, peculiar outsider who enjoys observing all the photos his customers make, and his favorite customer is Nina, wife of William and mother of the young boy Jake. Because of a huge discrepancy, Sy gets fired, but on his last day he discovers one of his customer, Maya, has an affair with William in one photo. He puts it in Nina's bag and then goes on to stalk her family. He bursts into a hotel room where William and Maya have an affair and forces them to pose nude while he pretends to be making photos of them. The police arrests him, but he admits he only wanted to punish William for abandoning his family.

Robin Williams appeared in many maniacal comic roles, but somewhere in his later part of his career he started accepting roles unusual for his 'mainstream' expectations, among the best was the one of Sy Parrish, a lonely, peculiar outsider in the sadly unknown psychological drama "One Hour Photo" that has a lot of potentials in the first half of the story, and fulfils a big deal of them. The shift between an extroverted comedian playing the role of an introverted outsider was always something fascinating in those rare kind of films that actually dare to try something different, and Sy is a really interesting character: he enjoys observing photos of his customers in the photo-developing store because his own life is empty and doesn't contain anything, and he is also deeply lonely but never allows himself any outbursts, always remaining calm and tranquil. Director Mark Romanek actually pretty subtly displays the story, capturing the full attention of the audience with small scenes, like the one where Sy is watching TV in his apartment while in the background there are thousands of photos of his customers plastered on his wall, and in the unusual mood he seems to be influenced by Powell's film "Peeping Tom". There is even one neat scene where the little boy Jake wants to buy a "Neon Genesis Evangelion" toy. The films shows a lot of understanding and measure for Sy in the first half, but once the second one starts it slowly starts falling apart because the climax isn't anything special, turns slightly unconvincing and vague, there is even one dumb pretentious scene present that seems totally off (the one where the main protagonists has a nightmare that he is crying blood) and the thriller elements don't work as tight as the dramatic ones, in the end finishing on a rather pointless note. Even though "One Hour Photo" really works only for one hour, it's still an interesting effort.