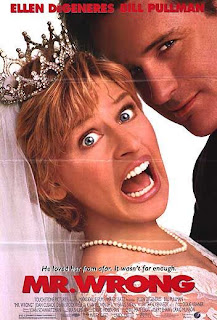 Dressed in a wedding dress, Martha is sitting in a Mexican jail and telling her story: when he sister got married, her parents put her under pressure to do the same as soon as possible, but since she worked in a TV redaction, she didn't have enough time to meet anyone. In some bar, she met Whitman, a prestigious invester in whom she fell in love with. At first, their relationship worked, but when Whitman persuaded her to steal and broke his own finger, she decided to leave him. But he wanted to forcefully marry her so he brought her to a Mexican town. There Martha wounded him and ran away back home with a friend.

"It all started so well, and ended so terrible", says the main heroine Martha in one scene, and certanly the viewers have to agree with her after they see the film she stars in. Truly, as much as "Mr. Wrong" has a harmonic and mild start, it has an inversely proportional senseless finale that places this black anti-romantic comedy into the category of a weak film. This film in which comedian Ellen DeGeneres stared in after the succes of her series "Ellen" didn't fulfill the expectations of the audiencen since the screenplay is full of tiresome gags and bizarre antiheroes, failing in the atempt to ridicule the cliche of princ charming that turns out a psychotic maniac, here embodied in the irritating character of Whitman (Bill Pullman) who is so nuts that he even breaks his own finger. The direction from Nick Castle is avarage, full of empty hysteria and overstretched roams of the camera. One can admit good intentions, but not the psychotic execution that lost it's track.