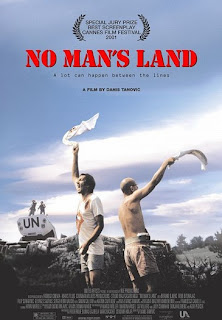 Bosnia and Herzegovina in the 1990's. A JNA tank kills a few Bosniak soldiers on the meadow. Among the survivors is Čiki who hides in an abandoned trench. JNA sends the Serbian soldier Nino and a sniper into the trench where Čiki starts shooting at them. The sniper dies, but he placed a mine under a Bosniak who he thought was dead, hoping that his colleagues would die in the explosion once they lift him up. Nino and Čiki argue in the trench about who started the war, but then a UNPROFOR force appears and tries to deactivate the mine because journalist Jane is filming them. Čiki and Nino kill each other, while UNPROFOR can't deactivate the mine and simply leave the soldier on it.

"No Man's Land" won an Oscar and a Golden Globe as best foreign language film in 2001, but Jeunet's "Amelie" was still better. All those awards come more as a "remorse" award maybe due to the fact that the West wanted to ease it's bad conscience for it's passivity during the wars following the break-up of Yugoslavia, and due to the fact that "Land" is a dark, bleak film with a tragic ending which some consider (unjustifiably) superior than postive, cheerful and sweet films like "Amelie", but when compared to some genius films made in the ex-Yugoslavia, like "Who's That Singing Over There", "Land" can't justify such hype. Almost the whole story revolves in a trench during the war, thus creating a static mood similar to the one in the thematically similar film "Lepa sela lepo gore", but the humor gives it agility and queues grotesque situations, like when the soldier lies on a land mine so his colleague scratches his leg in order for him not to move and blow them all up or the double-ironic scene where a JNA soldier comments the war in Rwanda with: "Dear God, those people in Rwanda are not normal!"

Not only that, but the director Danis Tanović sends a controversial message by implicitly putting the blame for the war in Bosnia on the lack of engagement of the international community and the ineffectiveness of UNPROFOR forces, that was shown in an extremely negative light as a force that ruins everything, especially noticeable in some satirical scenes like the one where the chief of the forces is more preoccupied with observing his secretary's legs than listening to an important phone call, which slightly eases the depressive end. Filled with many clever moments (in one of them, the two protagonists, one a Bosniak and the other a Serb, are arguing which side started the war, until one takes the gun and forces the other to admit that his side started it), "Land" is a thought provoking film, but Tanović's direction is thin and flat, more preoccupied with messages than crafting a creative film, which causes it to seem a little bit contrived.