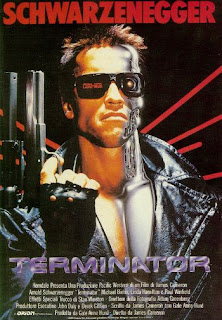 The year is 2029: After a nuclear war, intelligent machines and humans are fighting each other. In order to succeed, the machines send a cyborg, the Terminator, back in time, in Los Angeles in 1984 to kill Sarah Connor, the mother of the future rebel John Connor, before she gave birth to him. But the humans also sent their own agent, Kyle Reese, to prevent the Terminator. Meanwhile, Sarah is just an average waitress , and is surprised when the Terminator attempts to kill her. Kyle saves her and the two of them have intercourse. The Terminator kills Kyle but Sarah is able to destroy him in an automated factory. She leaves for Mexican soil, pregnant.

"The Terminator" 1 and 2 are two completely different films. "Terminator 2" is better, but it is still a typical Hollywood film with an optimistic and cheerful message in which the title hero is the good guy, while the original from 1984 is made entirely in anti-Hollywood way, in form of of a dark existential drama that seems as if it was written by a futuristic Franz Kafka. "The Terminator", the second film by director James Cameron, is a gritty (B) film with a minimal budget that has flaws, but whose execution pulled the maximum virtues out of the cliche, trashy plot. The best parts are actually small, subtle: while Sarah is working as an waitress, a naughty little boy puts his ice cream on her dress. Later she returns to her apartment, which she shares with her friend Ginger, and answers a phone call - the one calling is Ginger's lover, talking intimate erotic details, not knowing Sarah has actually answered the phone. And the 20-minute finale, in which the raw robotic exoskeleton is chasing Sarah, is especially intriguing, displaying a 'tour-de-force' energy, since the Terminator is confused from the noise of the machines in the factory where the heroine is hiding. Arnold Schwarzenegger, who speaks only 17 sentences, didn't film many excellent films, but by picking the role in this little unusual classic he had a lot of luck - his cyborg is a bad guy that doesn't taunt its victims or shows off; he just eliminates them and that's it. "The Terminator" is a film that at first glance seems entirely irrespective and stupid, but a one that leaves an positive impression when watched due to the director's pure ingenuity.