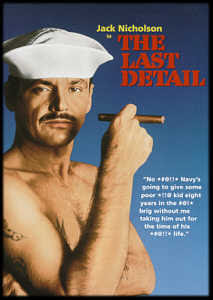 Two Navy men, Billy "Bad Ass" Buddusky and "Mule" Mulhall, are ordered to escort an 18-year old sailor, Larry, to the Portsmouth Naval Prison for stealing 40 $ from the polio relief box in a store. Buddusky and Mulhall soon find out Larry is a shy, gentle young man, and they are sad he is going to spend 8 years in prison and loose the best years of his life. So they decide make his journey memorable: the buy him the best food, drinks, bring him to visit his hometown, hang around with him and arrange a prostitute. In the end, just as they start doubting their mission, Larry panics and tries to run away. They catch him, beat him up and bring him to prison. As they are heading back home, they disccus how ungrateful Larry was.

"The Last Detail" is an unusual, flawed, but interesting social commentary about two contradicting things: friendship and duty. The simple roadmovie like story about two Navy men escorting a sailor to prison showed all those confusing, complex human relationships by meandering just between those two extremes. Jack Nicholson is a good actor, frankly more charismatic than talented, and sometimes too egocentric, but this is one example where he really didn't ham at all, creating a downplayed, quiet, static and introverted role of a bizarre Navy man that earned him Oscar and a Golden Globe nominations, and for which he won a BAFTA. As with a lot of movies in Hal Ashby's best period, the '70s, "The Last Detail" also speaks about the depressive theme of ending of a life circle or death, but in the end it transforms into a celebration of life and joy, finding happiness in the dark setting. In one funny sequence, the three protagonists enter a pub - Buddusky orders a beer for the 18 year old Larry, but the bartender refuses to do so because he is afraid the youngster might be underage. In a heated argument, the bartender threatens to call the shore patrol, and Buddusky presents his gun and military equipment on the table and says: "I am the shore patrol! Now give this man a beer"! It became one of the iconic lines of the 70s.

In another scene, Mulhall comments to Larry how "any girl you get in this world you gonna have to pay for, one way or another". The movie is full of clever little observations about life and the world, sometimes acting even like "Seinfeld" since it's basically a story about nothing, and the dialogues are full of swearing and slang, even somewhat reducing the extent of senseless scenes, like the one where the heroes accidentally enter a Nichiren Shoshu discussion meeting. But the films biggest problem is it's ending - the characters seemingly leave into the horizon as if nothing happened, as if they forgot everything they experienced, while the dreadfully inappropriate military music starts playing over the ending credits - some would argue the finale is an anti-climax, but the other would debate that the message is actually very brave and bitter, showing how every of the three characters are in some kind of a jail, real or just a psychological, and that they are not free in this world. The ending in the book was more appropriate, though, and showed that the film is missing that final little detail.