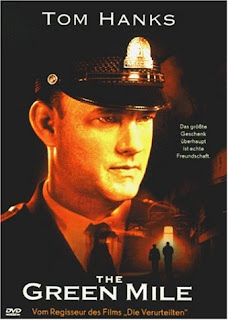 In 1999, Paul Edgecomb is 108 years old and is in a nursing home. He remembers back how he was a corrections officer in '35, being in charge of a death row in Louisiana, where prisoners were escorted to the electric chair. The newest prisoner is a black man, John Coffey, a tame giant who was found together with two corpses of raped girls and was charged of being the perpetrator. Paul soon finds out he has supernatural healing powers and becomes friends with him. Among the officers is also the evil Percy who executes one prisoner in the most brutal way. One day a new inmate is transferred to prison and John senses he is the real murderer of the girls, using his powers to control Percy to kill him. After that Percy falls into a catatonic state. John gets executed but Paul keeps his pet mouse.

"The Green Mile" is a sad essay about the ever lasting passivity of people, who sometimes have to obey orders and to do things they don't want to. Unfortunately, that passivity also transferred to the authors of the film, who chose to make into a standard, stiff, cliche melodrama instead of something special and stimulating. Overlong, overrated and over-preachy, "Mile" is actually good in the first quarter: in the poetic opening shots, without sound, armed farmers are seen walking in a field, but then the story becomes more and more bizarre, transforming at moments into a travesty. For instance, the main protagonist Paul has urinary problems and always screams when he is urinating. Then he encounters John Coffey, who has supernatural powers - and who places his hand between Paul's legs, mysteriously healing him while in the background a light bulb starts lighting: this sequence is so inadvertently funny that it's pathetic. To top it all, after that John opens his mouth and thousands of moths (?) come from his mouth, and then disappear.

Surely, if the authors wanted to address some esoterical issues, they could have done it in a better way. John Coffey - who is played by Michael Clark Duncan who is making such grimaces that not even Jerry Lewis would be ashamed off - apparently has a few parallels with Jesus Christ: he can heal people, his initials are J. C. and he is executed innocent, but those parallels don't add much to the film's quality. Forced poetry and too obvious cliches are also problematic. The movie is touching at times, ambitious and well acted, but no serious movie can work if he is oversimplifying things and presenting them as only black and white: for instance, the evil officer Percy is shown as a completely one dimensional bad guy without any positive feature since he in one scene squashes the inmates pet mouse with his foot and executes a prisoner on a electric chair deliberately without special equipment, causing his body to melt and him to die in an extremely painful way - that scene is disgusting and shockingly campy, and what's too much is too much. Actually, it's so bad the movie had to do extraordinary virtues in order to redeem himself for it. In the end, "Mile" is a solid and competent film, but 15 minutes of his running time are worth less than one minute of "Saving Private Ryan".