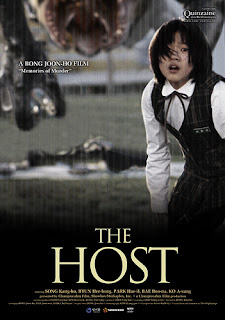 Seoul. Some American scientist ordered the pouring of the toxic formaldehyde in the local river Han. In 2006 a mutated monster emerged from the river and kidnapped a large number of people in the town, including Hyun-seo, the daughter of Kang-du, a clumsy employee of a small store. Kang-du, his brother Nam-joo, his sister Nam-il and grandpa end up in a quarantine, but manage to escape from the authority to save the daughter who contacted them through the mobile phone that she is still alive. Namely, the monster samples people and places them in the sever in order to eat them later. The government approves the use of the toxic "Yellow Agent", but the monster gets firstly set on fire and killed by Kang-du. Hyun-seo didn't manage to survive, but Kang-du adopted a young boy that was also about to get eaten by the monster.

From time to time a movie shows up that takes the standard, cliche concept for a story and handles it in a completely anti-standard way. South Korean fantasy film "The Host" is one of those films, and more. In that unusual endemic film the director Joon-ho Bong amusingly plays with the expectations of the audience: always when the viewer thinks that a situation is going to unravel by the scheme A-B-C, she suddenly unravels by the scheme A-Z-D, which gives the story unpredictability, spirit and charm. Besides the fact that the monster shows up right after 15 minutes, not at the very end, a good example is also a sequence after it kidnapped the daughter and some other citizens: her dad, Kang-du, and his sister, grandpa and brother gather to her improvised "funeral" and start mourning in front of the photo. Then they start whining and sapping, overshadowing every other person that mourned their kidnapped relatives. After a while the whining of the four becomes so exaggerated that it turns into a comedy at one point, especially when they all together fall on the ground and the reporters start taking pictures of them. Bong made a difficult transgression from a drama into a comedy in that sequence with such delicacy as if it was the simplest thing in the world.

The whole concept of a monster not eating their victims, but "saving" them to eat them later is slightly unrealistic, as is its anatomy, whereas the finale suffers from mild tendentiousness, but despite of this, the movie is directed with bravura and contains a load of virtues and healthy spirit with a secret message about family values, human ignorance and fight of the individual against the system: just like in Bong's previous film "Memories of murder", a mass murderer, this time a monster, is terrorizing people and the government could have stopped him, but it did not, or did not want to, either to use it as a pretext to place the county under martial law or because the monster itself is a symbol for the systematic problem that destroys the society, corruption and negligence, featured even through several scenes in the film. It is a shining film that made the most out of the unpromising plot, offering intelligent questions and social commentary, full of style (the way the protesters fall like dominos when smoke from "Agent Yellow" covers them up), whereas it also has one of the most inspired sequences of all time: the way the brother dodges a police trap inside the office at night by using only a paper clip attached onto a power plug which he plugs into a socket is a highlight of sheer ingenuity and resourcefulness.