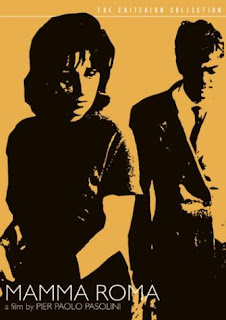 The middle-aged prostitute Mamma Roma got "fired" after her pimp Carmine got married. That gives her the chance to move to a better part of Rome with her 17-year old son Ettore and get a new job as a fruit seller. But one day Carmine drops by at her apartment and asks her to "earn" 200.000 Lire in 10 days, if possible, but she refuses. At the same time, Ettore fell in love with the girl Bruna, but the only thing she loves is money. Since he abandoned his job as a waiter, Ettore starts stealing to get money for her, eventually ending in madhouse and dying. His mother is devastated when she finds out about that.

"Mamma Roma", Pier Paolo Pasolini's second feature film, seems like a sequel from his brilliantly realistic debut "Accattone". Unlike some of his extreme and controversial films without compromise, "Mamma Roma" is, despite being existential and nihilistic, rather mild, gentle and introverted, up to the point that some viewers during the film's premiere didn't figure out the title heroine was actually a prostitute. The film unravels into a essay about the relationship between mother prostitute and son, giving equal screen time to both of them, and also making it clear that some events are bound to repeat each other in endless circle of fate (for instance, Ettore, the son, falls in love with a girl who only likes money, foreshadowing that she will become a prostitute herself). Also, the shot of a church dome seen through the window is repeated about 5 times during the film, serving as a symbol of sacrifice, humanity and unreached class ideals. But the despite it's subtlety, the movie as a whole isn't completely satisfying, maybe because of overemphasised symbols about the Virgin Mary and Jesus Christ, obvious in the finale where Ettore is sick, tied on a bed like on a cross. The other flaw is the lack of attractions, although some scenes are excellent, like the long 4 minute take in which Mamma Roma is walking on the streets at night and talking with people, who come and go, about how she had to "fool around" with an old man when she was 14 years old.