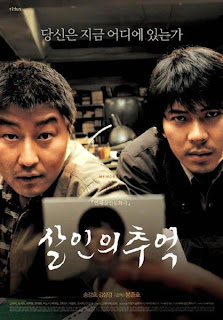 Hwaseong, '86. A serial killer, who attacks women exclusively at rainy nights, is keeping the whole South Korea in fear. Detective Park Doo-Man is desperately trying to solve the case, but the killer never laves any trace, so he gets joined by detective Seo from Seoul. Park suspects a mentally handicapped boy is the perpetrator, but it turns out he is not capable of doing such deeds. He then arrests a man who masturbated on the scene of the crime, and then a man who wanted a specific song to be played on the radio every time a murder occurred, but even they turn out to be innocent. In 2003, a young girl says to Park that the murderer looked like an average man.

"Memories of Murder", loosely based on true events, could best be described as the crime version of the play "Waiting for Godot". Namely, in that film two detectives are so desperately longing to solve the case of an unknown murderer, who seemingly never shows up, that they start to lose their sanity. But the inspired director Joon-ho Bong directs the bitter story surprisingly neutral and unpretentious, with excellent sense for humor: for instance, in one scene some guy is walking on the street and asks a frightened woman for directions, and immediately the detective Park shows up, beats him up, ties him up and accuses him of being the killer - in the next scene it turns out that guy is actually his new partner, detective Seo. Earlier on, Park loses an entire crime scene, a footprint of the killer on the ground, when a tractor runs over it. Occasionally some parts of the film are realized clumsy and pointless, the tone accidentally slips into misogyny at some moments and the story borrows from such films like "In the Heat of the Night", but the whole offers a sufficient number of clever observations and unconventional solutions. During the curse of the film the constant curfew is shown, and also how the police is beating up student demonstrators, indicating how the government was evil at that time, yet tried to (ironically) fight the evil serial killer. And even the calm Seo lost his patience and almost killed an innocent man, falsely accused of being the killer. The message is that injustice and evil just cause injustice and evil, and that maybe the government alone created a killer from the "average man", who started to hate the system he lived in.