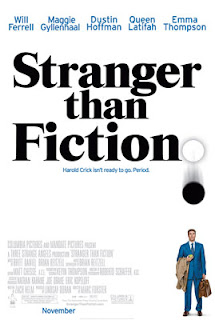 Harold Crick is a regular IRS employee in a big city. He is single, alone and loves to count everything, from the stairs up to the how much he brushed his teeth. But one day he starts hearing a female voice in his head. The voice starts narrating his entire life, his thoughts and his movements. He goes to seek help from professor Hilbert, a literary expert, who starts analysing if he is in a story that's a comedy or a drama. At the same time, Harold falls in love with Ana Pascal, a temperament baker. By accident, Harold spots Karen Eiffel, a British novelist, and recognizes her voice. He figures he is a character in her novel. He finds out her address and visits her. She admits she planed to kill him off in the novel and he agrees to comply. But just as he is hit with a bus, Karen decides to write a happy ending and make him live.

"Stranger than Fiction" has an inventive plot concept that satisfies 100 %, but it's realisation satisfies only about 60 %. The plot concept is, in a nutshell, "The Truman Show in a novel": the writer Zach Helm got a clever idea about a hero, Harold, who starts hearing a female voice narrating his entire life, and a few of the situations he places him in are gold. In one of them, Harold is paying a visit to a rebelling Ana Pascal, a baker that didn't pay all of her taxes. Just as he was starring at her, the voice began narrating about how he "started imagining how Ana shaves her legs in her bathtub and how she looks naked", much to his discomfort. In another, Harold decides not to do absolutely anything, causing the voice to stop narrating. In another, he was adjusting his wrist watch on the street, but then the voice narrated: "Little did he know that would cause his imminent death", causing him to look up and shout: "What?!!" But, there are too many plot holes, illogical and inconclusive elements. For instance, when Harold hears the voice for the first time, he reacts rather unconvincingly calm, as if he is not surprised at all. Also, the story didn't go deep enough and wasn't emotional enough. Dustin Hoffman is good, but a little hammy as the literary professor Hilbert, but it's questionable if someone like him would instantly believe Harold's story and would even try to help him. Emma Thompson is totally annoying as the nervous Karen, and one would wish her and Harold's encounter would have been elaborated a lot more, since it's crucial to the story. But Will Ferrell is surprisingly good as the main hero, for which he was rightfully nominated for a Golden Globe. The film handles the themes of free will, true happiness and the thin limits between reality and imagination, but it's too sugary and thought it was smarter than it actually is. The tagline of the film says: "He is not crazy. He is just written that way". The same can be said for the film itself: don't be angry at it's flaws, it's just written that way.