Say It Isn't So 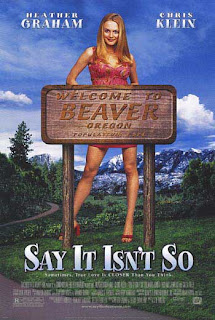 Gilbert grew up never meeting his parents. One day he meets a hairdresser, Jo, and falls in love with her. The young couple is happily in love, but just as they are about to get married a private inspector discovers that they are actually - brother and sister. Jo is shocked, immediately breaking up the relationship and leaving the town, while Gilbert stays at her mother's home and becomes the laughing stock of the town. But some time later, he finds out that he isn't Jo's brother after all, so he decides to find her. Jo in the meantime is preparing to marry the rich Jack. After a lot of troubles, Jo and Gilbert get married.

Vulgar comedy "Say It Isn't So" with a theme of incest is not one of the worst contributions of it's genre in the last 10 years like many critics like to claim, but it's still a solid example of awful anti-culture in film art, non the less. Speaking straightforward, the story has a few amusing moments (in the end, Gilbert finds out that his real mother is the actress Suzanne Somers), the plot about a guy accidentally falling in love with a girl that later turns out to be his sister is interesting, the actors are sympathetic and here and there some emotional, serious scenes show up, but they are all undermined by the unbearably distasteful and inhumane tone of the film as a whole that looks as if it hates every human being and tries to humiliate him in every possible aspect. There is a lot of hate directed at the Farrelly brothers too, but if anything, at least they always had sympathy and understanding for their heroes. The "humor" is senseless (a girl at the table shows, in front of her brother, mother and father, her breasts with a piercing in form of a bell, Gilbert's hand gets stuck in the anus of a cow...), the romance distorted and the vulgarity seems so to be there just because "it was popular in those days", making the only subversive part in the film the questioning of the perspective of incest.