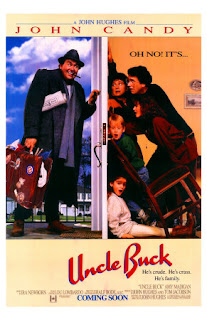 Bob has to take a trip with his wife Cindy to see Cindy's father, who is very sick. They have three kids and want to find a nanny to take care of them while they're away, but none of their friends is temporarily available, so they are forced to call uncle Buck: the unemployed, drunk black sheep of the family that earns money on horse races. Uncle Buck arrives and stays alone with the kids: Miles, Maizy and the teenage Tia. He gains the sympathy of all the kids except the rebellious Tia who wants to flirt with boys without any oppression. When her boyfriend dumps her, Buck helps her take revenge on him. When mom and dad return back home, Buck says goodbye to the kids and leaves together with his friend whom he made up with.

Amusing and simple family comedy "Uncle Buck" gains 90 % of its charm by picking the sympathetic and underrated John Candy for the role of the title hero: uncle Buck—who is a tacky version of "Mary Poppins"—tries unusually, but unpretentiously to babysit his brother's kids all by himself, which leads to crazy situations, but some of them, as exaggerated as they seem, captured a few truths about life. As with most films by John Hughes, some characters are rather one-dimensional (the "villains"), and the burden is enlarged by inappropriate moral scenes that the viewers mostly ignore because they seem too preachy and shallow (in one scene uncle Buck plans to go to bet on a race, and decides to conveniently take the kids with him—but just as they were in the car, he realizes bets and races are not suitable for little kids, and figures how egoistic he almost became). Another minus is Buck's aggressive behavior towards Tia's (ex) boyfriend—Buck actually tries to scare him off by presenting him his axe, and Buck even helps Tia take revenge on him. Still, despite everything, Hughes has a moral core and cares for his protagonists, and a lot of unnecessary criticism was aimed at his sentimentalism. Even putting that aside, the film has enough good humor and gains strength through sharp dialogues, like when Buck is making 3-foot wide pancakes for kids or when he is totally uninterested in the principal's snobby opinion, whom he ironically gives 25 cents to remove her mole.