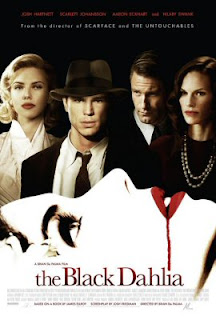 Los Angeles, 1940s. Police officers Bucky Bleichert and Lee Blanchard are two best friends and amatuer boxers, and they fight in one boxing match to attract audience to vote for preposition B that would raise the salary for the police. Kay Lake is Lee's girlfriend, but she also has affections for Bucky. After the body of Elizabeth Short, an aspiring actress, gets discovered brutally murdered, Bucky and Lee get obsessed with solving the case. Bucky meets Madeleine, a woman who looked a lot like Short, and who knew her. After discovering a lesbian film where Short starred in, Bucky starts suspecting Madeleine has something to do with the murder. Lee gets murdered when he wanted to confront a released criminal, and Bucky discovers he also robbed a bank in order to pay for a blackmail attempt. In the end, it is discovered Madeleine's mother Ramona killed Elizabeth Short.

"The Black Dahlia" is a confusing mess, a crime story without a real spark and with a lot of production problems that's watchable thanks to the good actors - Josh Hartnett and Aaron Eckhart are excellent, while Scarlett Johansson is good although it's obvious she didn't get enough space to show her real talent - serving sadly as one of the weakest films from the intriguing director Brian De Palma. The critically acclaimed novel from James Ellroy was executed, it seems, without any real interest of the authors involved, who chopped down and reduced the complicated story that could have lasted for 4 hours down to only 2 hours, and at some moments it's painfully obvious everything was rushed: one scene follows the other so fast the film doesn't have time to elaborate anything, or even to let the effect of the situations "sink in" to the viewer. The first third is really bleak and stiff, the second is pretty good and manages to get a few interesting details across - in one of them the characters are working in their office in a police station when they are hit by an Earthquake, frightened all, except for one who just continues to make his phone call. In another one, De Palma uses his classic subjective shot of the camera to serve as Bucky's perspective, who just entered Madeleine's home and introduced himself to her parents - but the finale is once again disappointing, explaining an resolving the murder of Elizabeth Short for almost 20 minutes. With a little more care and devotion to the original novel, this could have been a great film, but sadly it's a stiff, hectic and exaggerated achievement that doesn't have much to offer.