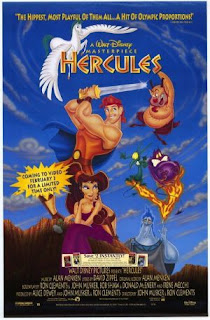 Zeus, king of gods, got a son called Hercules, but the evil god of underground, Hades, who found out from a prophet that he could remove Zeus from the throne with the help of Titans, kidnapped Hercules, made him mortal and left him on Earth. Hercules grew up with his foster, human parents, but when he turned 18 he discovered that his father is actually Zeus so he decided to become a hero to return back Olympus. After a training from Phil, Hercules meets a girl, Megara, and saves her. But she has to work for Hades. Still, Hercules frees her and beats Hades.

Walt Disney studio's "Hercules" is for some just a crazy nonsense that ridiculed the Greek mythology and turned it into a travesty, but there are also some critics that regard it as one of the best animated films from that studio. "Hercules" truly isn't uninteresting - the authors imitated the Hellenistic style of animation, while Megara is untypically sensual and quirky, almost as if she is imitating the "rough" type of woman from Lauren Bacall from the film "To Have and Have Not" - but because of mediocre songs, nominated for an Golden Globe and an Oscar, and bizarre references to "Karate Kid", "Superman", "Midnight Cowboy" and a lot of other films, it's hard to wrestle off the impression that some episodes from the animated show with the same title, released a year later, were better and smoother. Also, the standard Disney sweet overemphasis is not for everyones taste, although there are also darker moments present (the sequence where Hercules is cutting the head of the Hydra). One of the best scenes is the one in which Megara, after Hercules saved her from a bully, says to him: "You know how men are. They think "No" means "Yes" and "Get lost" means "Take me. I'm yours!" Later or she even adds: "I'm a big tough girl. I tie my own sandals and everything". Who ever managed to get those steamy lines through, really had courage. Some American/ Greek criss-cross gags and the rhythm are splendid, the animation is very good and James Woods is simply brilliant as the cynical Hades, making "Hercules" not much worse than the overhyped "Aladdin".
Grade:++
Posted by Marin Mandir at 11:43 AM