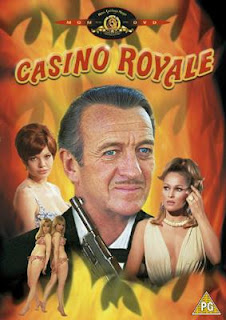 James Bond is enjoying his life since he went to retirement. But one day his colleagues persuade him to go back into action and help them solve a urgent case by blowing up his house. Since M died, Bond goes to bring his remains in a castle in Scotland and gets attacked. Soon he discovers his assignment is to stop a secret organisation called SMERSH and the villain Le Chiffre. With the help of his daughter from his lover Mata Hari he decides to bring confusion into the rows of the enemy by changing the names of a dozen of secret agents into James Bond. The dozen Bonds distract the enemy, and one of them is gambler Evelyn who was named James Bond and turned into an agent by a female agent. Evelyn enjoys being Bond and wins in a gamble against Le Chiffre. Agents are able to stop SMERSH, who was controlled by Jimmy Bond who wanted kill every man taller than 4' 6 leaving him the only big guy, but they all die in an explosion in a casino.

Legend says that the 1967 film "Casino Royale" was originally supposed to be revolving only around Evelyn, the character played by Peter Sellers, but he suddenly abruptly left the project because he didn't like parodying James Bond, thus the screenwriters (among them even Billy Wilder) were forced to invent and add another segment with David Niven to the story in order to somehow finish and save the movie as a whole. 5 directors and 10 screenwriters tried to bring some kind of an order into the incoherent structure, but it didn't work out: the whole stayed chaotic, overlong, shaky and eclectic. Some jokes are really good, like when Orson Welles is conducting a magic trick in a casino by making a woman disappear under a blanket and then laughing madly or when Woody Allen is starring as Jimmy Bond, the nephew of James Bond, but because of the bizarre mess of the story and forced humor it's funnier to simply read the synopsis of the crazy plot than to watch the whole film.