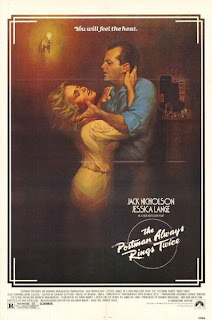 USA during the Great Depression. Frank, a small time crook, stops at a rural diner for a meal, but his partner seemingly leaves with his money. Nick, the owner of the diner, has pity with him and gives him the meal for free. Frank stays to work there and is soon having an affair with Cora, Nick's wife. They decide to kill Nick in order to start a new life: in their first attempt Nick ends up in hospital with a bandage over his head but survives. But in the second attempt they throw him inside the car down the cliff. The local prosecutor accuses them of murder, but their lawyer Mr. Katz manages to free them of any charge. Back in the diner, Frank is bored and has an affair with Madge, a worker in a circus. Just as Cora announces that she is pregnant and he realizes he loves only her, she dies in a car accident.

"The Postman Always Rings Twice" is a solid remake and adaptation of the same novel, but a one that disappointed in it's overstretched running time and eclectical pace, making him seem outdated compared to today's standards, but even compared to the past standards when placed with the brilliant Italian adaptation "Ossessione" from '42, and even the three timid sex scenes that surprisingly shocked the audience during it's premiere seem mild. Jack Nicholson is excellent in his role as Frank, but he is one of the only few virtues of this film. The attraction between Frank and Cora is non existent since it's shown only in ellipses, while Cora's role as Femme Fatale is unconvincing and shaky. The most subtle job done by director Bob Rafelson was to portray the troublesome, hard times in America during the Great Depression that could have caused those kind of criminal acts in order for people to survive, and also to show the confusing emotional state of Frank and Cora after they got away with murder of Nick. But even in that last third of the film the authors forced unnecessary subplots, one involving Anjelica Huston, that were to short to be elaborate and sufficient enough. Some points raised are valid, and some scenes are very good, like the one where Frank and Cora can't resist not to have intercourse on grass after they killed Nick in his car, but Rafelson directed the film without any true passion or spark. It seems the postman rang twice because nobody heard him the first time around.