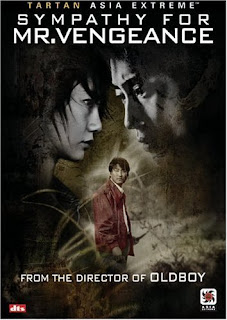 Ryu is a deaf-mute guy who wants do donate his kidney to his sick sister, but can't because their blood groups are incompatible. He contacts two men and their mother from a black market or organ dealers and they promise him a kidney for his sister if he pays them 10 million won and gives them his kidney. Ryu accepts, but they double cross him and steal his kidney. In order to get enough money, Ryu and his girlfriend Yeong-mi kidnap the daughter from Mr. Park, but she accidentally drowns in a lake. Ryu finds the organ dealers whereabouts ad kills them, while at the same time Park kills his girlfriend. In the end, Park kills Ryu too, but he gets killed by Yeong-mi's group.

Before the 21st Century, nobody was really interested in South Korean cinema, but director Chan-wook Park decided and managed to make a difference, even not hesitating to use drastic measures. "Sympathy for Mr. Vengeance" is the first part of Park's famous "Vengeance" trilogy, containing the same elements as the second two films - revenge, tragedy, fatalism - but also something that distinguishes it from them - it's not a thriller, but a drama. Indeed, it's a static, quiet story about a deaf-mute hero Ryu who had good intentions, but did everything wrong and in the end became a victim of awful fate, but towards the end the story gets more and more intriguing, until it finishes on a megalomaniac note of a double, parallel revenge. The story is somewhat too slow in the start and doesn't picks up until the second half, but it's filled with black humor (four guys are masturbating behind each other in their room because they hear woman's moans in the neighboring apartment and assume she is having an orgasm, but in fact she is moaning from pain due to kidney failure, while her deaf brother Ryu can't hear her), extravagant style that mixes eastern and western mentality and the simple, but still effective incorporation of the emotion of revenge that hooks the viewers. For Park, when revenge and hate are at stake, people are just animals, knowing they should listen to their logic, but being too weak to do so. It's an overlong, but impressive film that will cause many viewers to shiver after seeing it - not so much from fear, as from astonishment that even that's life.