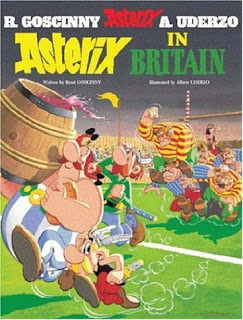 Caesar's soldiers conquered Britain thanks to the fact that British people don't fight during the weekend. But one village is still fighting against the occupation, thus sending Anticlimax to the Gaul village to seek help from the druid. Asterix and Obelix get the assignment to escort Anticlimax and the magic potion back to Britain. Although they manage through many obstacles, the Romans are still able to destroy he magic potion. But Asterix motivates the British to win anyway by giving them false magic potion - tea.

After probably the best contribution to the Asterix serial, the 4th sequel, that placed the emphasis on emotions, the list continued with "Asterix in Britain" the following year that once again placed the emphasis on irony. It's a weaker sequel with a messy structure that once again recycles the standard story of the two man heroes traveling to a different country, with rather grotesque details and an unusual decision of the French to collaborate with the Danish authors in the process, but a one that sparkles with wonderful visual gags and ironic jabs at Britain (for instance, it is revealed the British previously drank only "hot water" (!) before Asterix introduced tea to them). Also, at least one sequence is simply perfect: it's the one where Obelix wakes up in the tower of a maximum security prison with Gaulix, comes to the door and says to the guards: "If you like your door, you better open them up because we want to get out". When the guards just burst in laughter, Obelix uses his superhuman strength to easily break the door and simply destroy the prison by going down the tower - while at the same time Asterix is climbing up and also beating up every guard in sight. The opening song is sympathetic while the friendship and loyalty are some of the main motives, making the film an amusing, simple and good contribution to the serial.
Grade:++
Posted by Marin Mandir at 2:30 PM