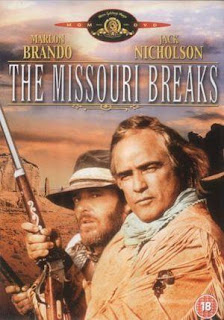 Wyoming, 19th Century. Tom Logan is the leader of a gang of crooks who steal horses. Although in clinch with the law, they are actually honest guys who simply don't have enough money to survive, thus getting shocked when they find a colleague hanged by the rich Braxton. Tom buys a farm from Braxton and falls in love with his daughter Jane. Since the horses keep getting stolen, Braxton hires "regulator" Lee Clayton, a mad head hunter, who kills the whole gang, except Tom, who kills him.

Peculiar revisionist western "The Missouri Breaks" is one of the most unusual grafts of it's genre ever, thus becoming a total flop with the audience and the critics back in 1976. "Missouri" tries to break the cliches and conventions of old Hollywood but it doesn't even reach the knees of the best anti-westerns like "McCabe & Mrs. Miller" and "Unforgiven", although it's director Arthur Penn himself directed an excellent anti-western "Little Big Man" years earlier, making the film as a whole seem chaotic, confusing, completely illogical and uninteresting. A not so small blame carries Marlon Brando - who back in those days already started spitting on the movie industry - because he decided to "improvise" and play his character Clayton almost as if he is in a comedy (in one scene he speaks with an American accent, then in another with an Irish accent; he announces he has a tooth ache and that he has to fart; while putting a house of a bandit on fire he wears a woman's dress(!)...), making his character's motivations even less understandable than they were. Still, thanks to a sharp and bitter screenplay, some of the bizarreness is even intentional (for instance, when Tom, after a train robbery, realizes he can't get out of the wagon because it stopped right over a bridge) while Jack Nicholson is excellent.