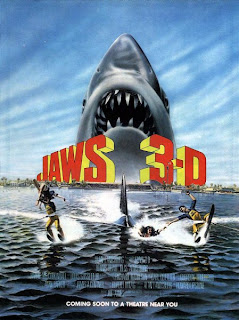 A white shark gets lost in a lagoon in Sea World. Mike Brody, the son of Martin Brody, works there and has a relationship with biologist Katherine, while Calvin is the founder of the park and his boss. When the dolphins start acting scared and a technician gets killed, the crew discover the shark and keep him there captured to make a film about him. But the shark is just a little baby, while it's giant mother is the real danger. The giant shark causes a flooding of the underwater tunnels and smashes into the control room, but Mike is able to kill it with a hand grenade.

The second sequel, "Jaws 3-D", is another step backwards in the long series of follow up films to the original. Except for the forgotten and tedious 3-D promotion and design of the film, which is hardly noticeable at all, the thin story turned out more campy than it was advisable and naively displaced the setting out of Amity and main hero Martin Brody to Sea World (what a bad promotion for the park) and his son Mike Brody (played nervously by Dennis Quaid), but without much effect since the film is truly weak, even barely watchable. There is this subconscious human fascination with giant monsters, in this case a white shark, that keeps all this sequels going, making them at least seem like a "guilty pleasure" since some are eager to feel the adrenaline rush and can't resist not to watch what is going to happen next, but the original film incorporated that into it's structure and still remained skillful and clever. The horror sequences are awful and reach for cheap splatter violence (in one particularly disgusting scene, a diver is inside the mouth of the shark, getting swallowed alive), unintentionally funny moments (the crew in Sea World close the door of the a lagoon and the shark bumps into it like in a cartoon), boring moments and a disastrous finale. Still, for all of it's flaws, the dramatic-romantic scene where Mike and Katherine are hugging at the beach at night and talking about their future, actually seems good and maybe something more could have been made out of it if it wasn't in this film.