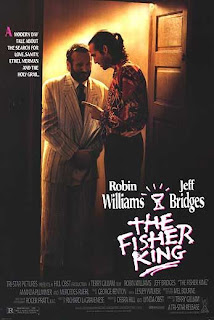 New York. Jack Lucas is a cynical talk radio host up until the day when one of his comments inspire Edwin, a psychotic caller, to kill seven people at a bar. 2 years later, Jack is in depression and a shaky relationship with video owner Anne. One night, as he was attacked by two delinquents, he was saved by the homeless man Parry who is in search for the Holy Grail (in reality a cup) in the mansion of a rich man. When Jack discovers Parry's girlfriend was killed by Edwin, his consciousness inspires him to help: Jack arranges Parry a date with the woman he fell in love with, Lydia, which ends up fine. But then Parry is beaten to coma by the two delinquents. Jack steals the cup from the mansion and Parry mysteriously awakens from the coma.

"The Fisher King" looks like Terry Gilliam's more serious take on the symbolic search for the Holy Grail, as opposed to his absurd comedy "Monty Python and the Holy Grail". In this case, the Grail is the symbol for happiness and redemption, and the touching story about two outsiders - Jack, spiritually poor but materially rich, and Parry, materially poor but spiritually rich - is enriched with humor thanks to the sharp screenplay from Richard LaGravenese, but Gilliam ocne again fell into mannerism with his eccentric direction, "Felliniesque" style and spot-like montage. Even though filled with nice details and humor (Jack is watching a lame sitcom and says: "This is not funny", upon which Anne asks him: "Then why are we watching this?", making him reply with: "I want to see just how unfunny it is!"; Jack's sleeve gets stuck on a door knob and ripped apart), the first half is especially hard to sit through due to the already mentioned pretentiousness and whimsical tone, but is bearable thanks to the very good Jeff Bridges and the good Robin Williams, who, despite all of his maniacal outbursts, seems fitting in the unusual role for which he won a Golden Globe as best actor in a musical or comedy. Luckily, the second part of the film is much better crafted and much more "normal", resulting in the incredibly charming subplot where Jack and Anne are trying to match the shy Parry with the equally shy and clumsy woman of his dreams, Lydia (brilliant performance by Amanda Plummer, even better than Mercedes Ruehl who an Oscar and Golden Globe as best supporting actress); their cute humorous interactions and romantic clumsiness simply has to be seen. "The Fisher King" isn't particularly relevant or famous today, but it's a good and ambitious semi-king among the bizarre humorous dramas.