Deal of the Century 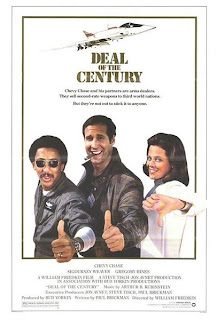 The military regime of some Latin America country intends to buy nuclear weapons and start a bloody war: "Even up to 3 % of population would survive!", they say. Sleazy American arms dealer Eddie Muntz has been heavily wounded in his leg when complications occurred during his latest weapons sale, but when he accidentally gets the opportunity to make his biggest deal he doesn't hesitate for a second: one of his colleagues commits suicide so he steals his plans to sell a deadly weapon to the dictator. Although he has bad conscious since it's Christmas, Eddie still goes on with the deal, but his religious partner Ray manages to stop it.

This could have been an intelligent and imaginative satire not only about arms deals but also about the primitive suicidal tendency of people in charge of countries to strive to destroy each other, especially since the direction was taken over by then inspired William Friedkin, but in the end "Deal of the Century" turned out to be a weak, overstretched and stiff achievement that offered the above mentioned thought provoking elements only is small crumbs. Except for becoming a box office flop, this unfunny movie didn't exploit it's sharp ideas to the end and the impression towards it is rather distorted: except for comical moments, dramatic ones were also added in the story (the whole subplot where Chevy Chase's character gets wounded in the leg and spends practically 90 % of the film limping), as well as pessimism and anxiety, combined with a forced moral in the end (the story plays out during Christmas), while the characters were left as one dimensional puppets: we don't hate them, but we don't love them either. Sigourney Weaver on the other hand is good, while the take of the events is rather interesting, making this sufficient film in a very abstract way as a mad satire even slightly successful.