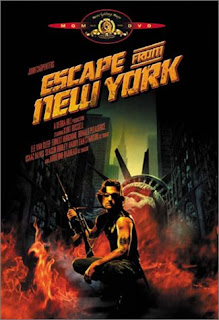 In late 1990s, the whole New York has been sealed off by 60 foot tall walls and became a giant prison. When the president of the USA escapes from an abducted plane and crashes with his escape capsule in New York, he is captured by mastermind criminal Duke. In order to save him and a valuable tape, Police Commissioner Bob releases the outlaw Snake Plisken from prison and orders him to conduct a rescue mission in 24 hours - if he doesn't, he will be killed by two charges in his neck. With a help of his colleague "Brain", Snake rescues the president, but a lot of people die. Just as the president is about to hold a meeting, it is discovered Snake actually gave him the false tape.

Like many past futuristic films, John Carpenter's "Escape From New York" also seems dated by today's standards. It may be that the story is actually Carpenter's cynical commentary at the disappointment of the president during the Watergate scandal, but it seems he didn't put any effort in realizing the film: it's a solid action/ adventure story with a few good moments, but pale and too "safe" to go anywhere deeper. Kurt Russell is very good, yet his Snake Plisken character is a very one dimensional character, a stiff action figure that only depends on "cool" attitude. One of the few moments where his charm really comes across well is the sly ending where he swims atop. The whole rescue mission is a stiff, standard rescue mission plot with very little surprises (among them is the hilarious Ernest Borgnine as the taxi driver that simply throws a Molotov cocktail at a band of criminals from his cab) that in the end resembles more to an dry amateur action flick then a smart social satire. A few nice ideas here and there (Snake opens the hood of the car to check the engine, but an armed criminal pops out), but all in all the film is tame and chaotic. For instance, why would New York be transformed into a giant prison? When Snake is fighting a giant wrestler in an arena, the people just conveniently leave when they hear the news the president escaped, giving him the opportunity to escape. For all of Carpenter's talent, this cult film seems to have caught him in an uninterested mood.