Please Save My Earth 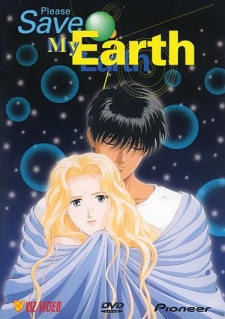 Tokyo. Alice is a shy teenage girl that gets the assignment to babysit Rin, a 8-year old boy from the neighborhood. But they have an argument and Rin falls from the balcony, ending in hospital. At the same time, Alice gets strange visions of her past life, where she was a woman called Mokuden, a scientist of an alien race, together with 6 more staff members monitoring Earth from an Moon base. Alice discovers her classmates Issei and Jinpachi have similar memories, concluding they are reincarnations of scientists Enju and Gyokuran. Even Rin remembers his past life as evil Shion, but introduces himself falsely as Shukaido and gets telekinetic powers. Namely, he wants to take revenge on Haru, the real reincarnation of Shokaido, because he was in love with Mokuden: Shion was vaccinated against a virus and was the only survivor of the base, living 8 years alone after everyone else died. In the end, he makes up with Alice and Haru.

Anime "Please Save My Earth" truly defines the term "unbalanced" in full sense of the word. Namely, that anime series has a genius concept, subtle exposition, crystal clear animation and skillful style, but it fell into mistakes and flaws that it shouldn't have even gotten in to. Simply put, by handling the themes of reincarnation, aliens, telekinesis, psychic powers, unknown moon base, lost love and a girl that can talk with plants and animals, the story crammed too many strong issues and got a immature mongrel where none of them was elaborated enough in the (too) short 6 episodes of the series. Actually, it would seem as if someone would try to cram "Star Wars", "Back to the Future", "Jurassic Park", "Alien", "Psycho" and "Love Story" into one film. At the same time there are enough interesting situations present, like the one where the young lad Jinpachi gets a surprise kiss from his friend Issei, who is the reincarnation of the woman scientist Enju, or the frightening subplot where everyone died on the moon base from a virus except for Shion who was vaccinated and stayed there living alone for 8 years, until he finally died and got reincarnated. Also, the English title doesn't have any connection with the story at all. If one would just look at the potentials, "Please Save My Earth" would be one of the masterworks of anime culture, but the final result didn't exploit all it's possibilities in the rushed realisation.