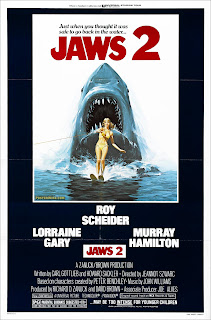 After he eliminated the giant white shark, Martin Brody, Police Chief of the sea resort Amity, is trying to relax and forget the events. His wife considers him a hero and they go to visit a show. But then a body of a bitten Orca is found on the beach, as well as the corpses of some divers. Obviously, a new white shark appeared, but the mayor is once again refusing to close the beach. Brody's sons went to sea with their friends, but get attacked by the shark. Martin rescues them by forcing the shark to bite a electric cable.

The sequel of the excellent horror "Jaws" is not that good as some claim it is, although it is not entirely weak either: the authors managed to make the film look congruous, but in the end it is just a recap of the original, with some situations getting directly recycled from it. Spielberg immediately refused directing "Jaws 2", so he was replaced by Jeannot Szwarc, making the difference and the talent between them obvious: it is never explained where the new giant white shark came from nor the incredible chance that it stumbled exactly at the same place as the previous one, the cheap dramatic moments seem stiff while even the identical critique of greed and mindless profit evident in the mayor who refuses to close the beach for tourists, that was problematic even in the first film, seems even more unrealistic here. Too bad the only real confrontation between the shark and the people occurs only in the finale - dismissing the unintentionally comical sequence where a driver shoots at the shark with a flare gun, but hits his gasoline tank instead, and the boat explodes with him - where the giant fish dies in the last minute in a rather unrealistic manner, but because of the intention of the authors to at least try to seem subtle, solid "Jaws 2" are much better than the following two unnecessary sequels.