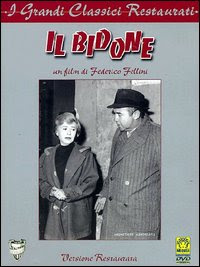 Augusto (48), Carlo "Picasso" and Roberto disguise themselves as priests and drive up to an isolated house. There they start with their scam: they explain to the old ladies that a murderer is berried in their yard, together with his treasure, and that they must conduct a Christian funeral. They leave the (false) treasure to the old ladies and in exchange get 425.000 Lire for 500 masses for the murderer's soul. Later on, they enter a illegal settlement announcing themselves as city officials who sell (false) permits for apartments that cost 10.000 Lire. Augusto is a professional con artist and is irritated that Carlo is spending his money for his wife Iris and his daughter. Augusto attends a party and gets arrested. Once released, he goes on pretending to be a priest, but donates all his money to a handicapped girl, so he gets killed by his colleagues.

It's not surprising that Federico Fellini, before his success with his dramas "The Road", "The Nights of Cabiria", "8 1/2" and "Amarcord" that all won an Oscar for best foreign language film, caused a scandal and anger of the church with his scam drama "The Swindlers". Namely, in the exposition, the con artists Augusto and Carlo disguise themselves as priests in order to double-cross some old ladies and get their money because they demand the salary for 500 masses, which offers a lot of subversive ideas (Carlo half-heartedly throws a crucifix into Augusto's hands, their driver is a flirting idiot...). But in equal measure, the film criticizes bureaucracy in the sequence where the trio pretends to be city officials selling apartment permits, and it's messages and themes are not forced but focused, with a sophisticated sense getting incorporated in the narration as a whole. Although it seems like a typical film inspired by Italian neorealism, "The Swindlers" actually reduce the poetic realism and slightly differ from it by Fellini's imagination and professional actors. Back then, the critics claimed this is a case of a "weaker Fellini", but it's not true: this bitter drama sparkles today, the uninterested Broderick Crawford actually seems suggestive while there is even a surprising melancholic tone present.