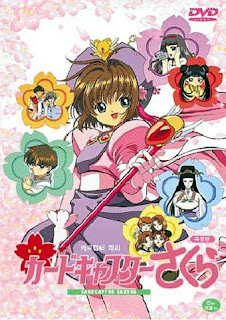 Sakura, a 10-year old girl, discovers a mysterious book in her father's library, from which numerous magical cards escape when she opens the first page. Guardian Kero, a cute creature that resembles a flying rodent, orders her to capture all those cards back. With the help of her magic stab, Sakura captures the first card, a creature that resembles a giant bird, but she is spotted by the girl Tomoyo, who becomes her partner, filming her every assignment with a camera. Other cards take shapes of water, trees, animals...There is also a boy, Syaoran Li, who is also capturing the cards, while Sakura's big love is the 18-year old Yukito. Sakura is declared the new master of the Cards, but she stays friends with Syaoran.

The cute and charming "Cardcaptor Sakura" is a real synonym for what a "magical girl" anime has to offer: a lots of fairy tale, surprises, euphoria, feminine touch and color. Unlike the thematically similar anime "Wedding Peach", "Sakura" has a more stabile animation, better structure, calm direction and esoteric mood, but is more inteded for children's audience. A little shift from the sweetish western rules are subtly incorporated yaoi and yuri elements, mostly present in the girl Tomoyo who is such a devoted fan of the title heroine that she films her every assignment with her camera in order to proudly watch her on big screen, and her intimate friendship with her gains almost lesbian proportions. Another departure from the rules of the genre includes the fact that Sakura's costumes are not provided by magic, but are hand made by Tomoyo, while some "battle" sequences have a sharp sense for humor (for instance, the girls pour a water card into the refrigirator causing it to freeze). Many claim this anime if one of the best contriutions to the genre, but that's not the case: there are far better examples of animes that handle the themes of death, change and growing up, while the rather thin "Sakura" is just for (smart) kids. "Cardcaptor Sakura" doesn't fall entirely into the "the emperor has no clothes" category because of it's many virtues, but it's still close to the category "the emperor only has pants", an anime where there's still something missing to be considered a true classic of it's genre like Takeuchi's "Sailor Moon" or Nagai's "Cutey Honey".