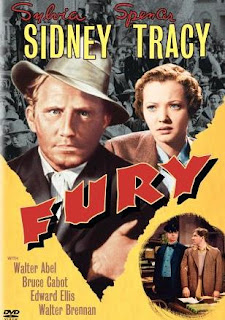 Joe Wilson and Katherine are a young couple that plan to get married. But since they have financial problems Katherine leaves for another town for a job. Joe adopts a dog from the street and opens a gas station, earning enough money to take a trip with the car to visit Katherine. But in a small town he is stopped by a sheriff and put in jail under suspicion that he is one of the kidnappers of a local girl. The policemen quickly spread the news, making the inhabitants determined to lynch the "perpetrator". They siege the prison and set in on fire in blind hate. Thanks to an explosion, Joe manages to save himself and hide, making everyone think he died in the fire. A trail convicts 22 inhabitants of the town to death, but just then Joe shows up and admits he is still alive.

Shining thriller-drama "Fury", the first American movie by the German director Fritz Lang, is masterfully displaying the old psychological legend that a crowd is a dumb mass without a head or a tail. Spencer Tracy is excellent in the leading role of Joe, an innocent victim of a lynch of the mob, adequately shown in the exposition in an idyllic state: he adopts a dog from the street and works hard, and when he goes to visit his fiance he drives a car on which he wrote: "Don't mind me, I'm nuts. I'm going to get married". The tangle in which he gets mistakenly identified as a kidnapper radically shifts the tone of the story, becoming dark and bitter. Lang shows the blind hate of the inhabitants, but often with a brilliant sarcasm that gives it a special sharpness. In one of those genius scenes, a man asks himself how do people become criminals while a barber with a blade in his hand looks at the costumer and says: "You see sir, you have the prettiest head in town, but in my 20 years of work I sometimes get the unexplainable urge to simply slice someone's throat! Those are...Instincts!" When the barber returns he finds just an empty chair. In another, while people are putting the prison on fire in which Joe is trapped, mothers raise their babies to better see the gruesome spectacle while the final tribunal fulfils this ode to ethics. The most chilling part of the film is the contemplation that even Joe changed and became obsessed with hate after all what has happened to him, making the film come a full circle, and a small masterpiece.