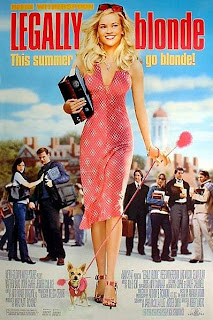 Elle Woods is a blond, kitschy girl, shocked when her boyfriend Warner ends their relationship because he studies at Harvard and wants to make a political career with a "serious girlfriend". In order to win him back, Elle studies hard and manages to enlist into Harvard herself. But she discovers Warner is already engaged to Vivian, which crushes her, together with tough professors. Still, she makes friends with Emmett and as an intern manages to defend a young woman innocently accused of killing her husband at the court.

"Legally Blonde" is a standard, conventional, but amusing and cute comedy with sustained humor that unusually displays an anti-racist statement with regards to the modern "dumb blond" cliche. In this story, the main heroine Elle proves that even though she is blond, cheerful, kitschy and naive, she is actually a rather intelligent person with a soul that refuses to get pinned down under any category or type: Reese Witherspoone is simply brilliant in the leading role, for which she was nominated for a Golden Globe as best actress in a motion picture musical or comedy, together with the film itself. But to equal amazement, Linda Blair is also amazing as her rival Vivian, especially in the scene in the classroom where she mischievously touches the shoulders of Elle's ex boyfriend in front of her. The director Robert Luketic directs the film with a solid craftsmanship and a surprising sense for feminine (the way Elle sits on a bench and angrily wiggles with her hair after she was expelled from class from Mrs Stromwell), in accordance to the script written by Karen McCullah Lutz and Kirsten Smith, and even avoiding the low cliches (even though she was rejected by Warner, Elle never plans to take revenge on him, but to win him back). The movie doesn't have much going for it - it's practically a run-of-the-mill comedy with predictible messages - but with emotions, and a lovable effort put by everyone.