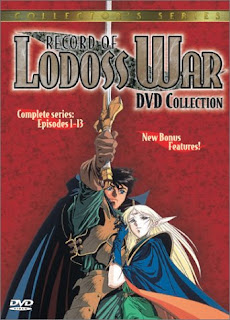 Somewhere on some alternate world in Medieval times, many counts and dukes fight for the island Lodoss. Young knight Parn, together with wizard Slain, dwarf Gim and female elf Deedlit, travels through Lodoss to liberate it from the mysterious witch Karla. On their way they slay a dragon, free a village from Trols and save princess Fiana from the witch. Resting in a castle, Deedlit falls in love with Parn. But Karla organizes unseen wars and in the end kills both kings of separate kingdoms. Parn discovers that Karla is actually obsessed with evil powers of a crown that controls her - when he takes her crown off, she becomes a good person, but Gim dies in a battle. A new enemy infuriate a giant dragon, forcing the inhabitants of Lodoss to slay it, and then kidnaps Deedlit and wants to use her to destroy the island. But then Parn shows himself and stops him, rescuing Deedlit. Everyone celebrates him and he leaves with her.

310 minutes long 13-part Sword and sorcery anime series "Record of Lodoss War" that handles the theme of fictional Medieval wars fought on Lodoss island seems to be draining a lot of inspiration from Tolkien's "Lord of the Rings" and has an excellent finale, but for the most part it's simply too mild. Many fantasy elements end up conventional, but some stand out, like the inspiring juggling with landscapes, noticeable in the opening titles where the two protagonists observe a giant dragon emerging from the clouds from a distance and landing on a mountain. A majority of the characters are pale and sluggish, talking only about dry plans of attacks and battles, which in the end makes the detailed world seem rather grey. Still, one character stands out with ease: it the sympathetic blond female elf with long sharp ears, Deedlit, voiced phenomenally by Rica Fukami, adding a refreshing dose of charm, though even she shows her three dimensional posture in a few scenes, like when she dances with Parn and jokingly comments: "Uh, it's really hard to always senselessly giggle at parties!"