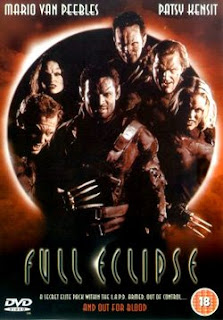 Los Angeles. Cop Max Dire is the best friend of his colleague Jim who plans to get married and leave that risky job. On one assignment, Jim gets wounded and falls into a coma. But one cop gives him a special serum that makes him well again, but also hyperactive. Max is pretty surprised by his strange behavior, but even more when Jim commits suicide. Max then gets a new superior, Garou, who invites him to a secret meeting, where also the attractive Casey can be found, and shows him that one can get special powers with the serum. Max at first refuses to take it, but Casey forces him. Max then gets special powers himself, but discovers that Garou is a werewolf, and thus resists his influence. Garou kills Casey and attacks Max, but he survives. Max then kills him with a cocktail of silver, returning to fight crime.

Low budget horror "Full Eclipse", that enjoys a cult status in some small circles, is a very solid achievement with correct mood and unpretentious structure, but it isn't especially inspired. The best part is the exposition (the long take in which Max and Jim talk in a car; the surreal sequence in which 'supercop' Jim jumps on a bus and hunts down the criminals) and the direction by Anthony Hickox is pretty good, but the movie as a whole lacks sharpness and spark, thus ending like a mild TV horror. Mario Van Peebles is excellent, except that his character Max is rather confusing (why did he resist the werewolf cops' methods of fighting crime when he himself continued their way in the end?) while the only erotic scene in the film is too shy.