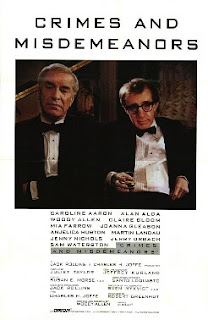 Married eye doctor Judah Rosenthal is hiding a secret affair with his patient Dolores. But she demands that he should decide between her and his wife, otherwise she will tell everyone about the affair and his evasion of money from his work. Judah asks his brother, who has contacts with the mafia, to kill Dolores - which he does. Although everything went smoothly and nobody even suspects him, Judah is sad, tormented by guilt and begs God for forgiveness...Documentary filmmaker Cliff Stern gets the assignment to make a documentary which celebrates the rich TV tycoon Lester, a man he hates. They both fall in love with the producer Haley. Although Cliff and Haley become close, she chooses Lester. Cliff and Judah meet at a party and comfort each other.

Director Woody Allen made an interesting experiment: a movie with one story that's a serious drama and with the other that's a light comedy. Thus, the finale is crucial since the two stories intervene and become one when Allen's character, the symbol for the cheerful in the comedy story, and Landau's character, the symbol of serious in the drama story, accidentally meet. With small gestures, unobtrusive direction and simple but also demanding narration, Allen crafted one of his most ambitious films. The funniest elements in the comedy segment are shrill dialogues, like: "We have to make a movie about him. He is an American phenomenon." - "So is acid rain." - "But you love each other like brothers!" - "Yes, like Cain and Abel." The most touching moment from the drama segment is when the eye doctor Judah looks at the dead lover who seems to "look" at him. As with most films from Allen's second phase, "Crimes and Misdemeanors" also demand a lot of patience and restrain, but reward abundantly since it's a bitter-cynical and skillful work contemplating about fragile justice, despite it's conventional approach turning into Allen's third and final masterpiece.