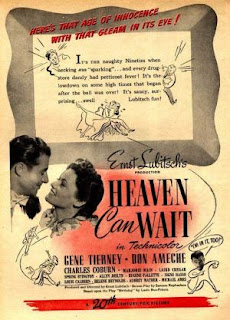 After his death, Henry decides to automatically and voluntarily report to Hell. At the doorway, shaped like a library, he meets some man called "His Excellency", and tells him about his life: he was born in the 19th century in New York, and already as a young boy he was crazy about the girls. When he kissed one, he had to conclude with shock that he must also marry her, but his French teacher explained him those were only old traditions. When he was 15, she showed him the Moulin Rouge and was thus fired from her post. With 26, Henry married Martha, the fiance of nephew Albert. Martha left him with 36 because she suspected he was cheating on her, but returned to him eventually. She died on their 25th anniversary of marriage. Henry's son Jackie became angry when he continued to hunt for women at night. But His Excellency concludes that Henry isn't that bad and sends him to Heaven.

Ernst Lubitsch, the director of many excellent films, obviously decided to imply in the satire "Heaven Can Wait" how love urges and lust don't have to be a sin for the main character Henry, a Casanova wanna be, but he didn't manage to use the full potential of his intimate life to the maximum. The first third of the film works in virtuoso fashion: Henry voluntarily reports to the lobby of Hell, thinking he is doomed anyway due to his life as a womanizer, but he gets received by some man called "His Excellency", who tells him: "Oh, Mr. Henry! Come in! Sorry for having to wait, but lately as if the whole world is going to Hell!" The main story is then told, showing in flashbacks his life, ever since he was crazy about girls as a kid up to his life as an young lad who meets Martha for the first time, who insists on buying the book "How to make your man happy", but he shows her the picture of the author, a grouchy old hag, and thus asks her how such a woman can ever make a man happy. The movie has wit, but, unfortunately, the viewer doesn't get the impression that he is a real womanizer because he is seen only with two girls, thus making it seem the writers were to shy to elaborate on the tricky subject. Too much babble, conventional tone and heavy ellipses in the story sabotage the impression, as well as the lack of points.