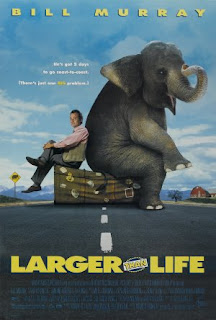 It's the story about a cynical motivational speaker, Jack Corcoran, telling his philosophy in mini-malls. When he gets the message that his dad is dead, he gets very surprised - since his mother told him he was dead for over 40 years now. He goes to a small town and discovers his dad was a clown who left him with a debt - and an elephant, called Vera. He decides to sell Vera, leaving him with two options - either bring it to ecologist Mo who would transport her to Sri Lanka where she would live free, or to a circus led by Terry Bonura. On their long trip using trains and trucks, even gaining an enemy in the trucker Tip, Jack and Vera become friends. Jack at first sells her to a circus, but when he sees how the elephants are mistreated there, he changes his mind and brings her to Mo instead.

"Larger Than Life" is obviously one of those half hearted written, light comedies where the authors didn't put much effort into it. It's one of the biggest commercial failures of Howard Franklin and Bill Murray, but so was their "Quick Change" and it was still an excellent comedy, while here only the first 5 minutes are excellent, but the rest is inert and inept. It's a harmless road movie for kids, nothing more, with slow rhythm and dreadfully lifeless screenplay without ideas that doesn't have anything going for it except the charm of the actors. The only one who brings some spirit into the film is the brilliant Bill Murray, one of the most underrated comedians of the 80s and 90s, who seems to have a blast even in saving such poor films like this one, when he doesn't have any better offers from Hollywood. Maybe precisely thanks to him the film manages to squeeze at least 4 good jokes, and the best one is when he is improvising driving a truck up a hill but accidentally pushes the wrong button which causes the whole frontal part of the truck, including his seat, to lean forward for over 45 degrees, resulting in a hilarious image. Also, the charm of a friendship between a human and an animal has some sympathies, Janeane Garofalo has a solid performance as Mo, as well as Matthew McConaughey as the mad truck driver Tip, while the whole film is always innocent and harmless, and in those times even that was something.