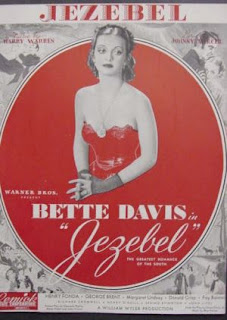 New Orleans, 1852. Buck is rather annoyed since the woman he loves, Julie Marsden, is going to marry the banker Preston. When the mischievous Julie insists on wearing a red dress on a important ball, even though it is the rule that unmarried women can only wear white ones, she shocks Preston, but he decides to teach her a lesson: when they arrive at the ball, Julie suddenly has second thoughts and becomes ashamed, but he doesn't let her leave the room. As a consequence, they argue and break up. One year later, the secluded Julie is overwhelmed when she hears Preston is back in town - until he arrives with his wife, Amy. And expresses sympathy for the North. In a duel, Preston's brother Ted kills Buck. Since the whole town is contaminated with Yellow fever, they can't get out. Preston becomes sick too, and Julie decides to go with him to the abandoned island.

Interesting history drama "Jezebel" isn't a classic, but it's appeal, charm and William Wyler's skillful adapting of the play by Owen Davis still give it freshness. Actually, the first half is excellent, but the second one seems too light, contrived and slightly vague. Basically, it's a refreshing woman's film set in the South in the 1850s, and the mischievous and strong heroine Julie really reminds a lot of Scarlett O'Hara: ugly Bette Davis plays her marvelously, and even manages to act attractive at times, which is why she won the Oscar as best actress. Some of the scenes seem rather naive from today's point of view - for instance, in the first appearance of the heroine, she tells a boy servant to take care of her unpredictable and wild horse. The boy says: "But he bites!", upon which she replies with: "Then bite back!" and uses her horse whip to raise a part of her long dress and enter her home with audacity. Yet, even though cinema was tame and sustained in the 1930's, drama moments could still stand out with their power, as it is shown here in the midst of all romantic complications, while some scenes still seem modern, like the unique one where Julie takes her dress off, revealing her underwear, and puts another one. Even though the finale seems rushed and the point weak, "Jezebel" never falls into the light category of soap operas, which is why it still works.