Rebel Without a Cause 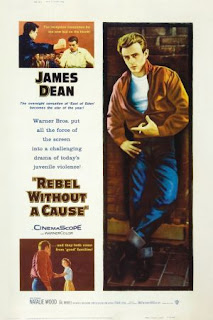 Three teenagers are detained at a L.A. police station: Jim and Judy because they were wandering about at night, and John because he killed a dog. Judy is rebellious because she wants to attract the attention of her cold father, while Jim can't stand his cowardly father who is constantly pushed around by his mother. The parents pick up Jim and bring him back home. Since they recently moved in town, Jim barely finds the way to his new school. In a planetarium, he is attacked by a gang led by the bully Buzz, who challenges him to a drive towards the cliff. Jim jumps out of the car just in time while Buzz doesn't and thus dies. Buzz's gang attacks Jim and Judy, so John shoots one member, but gets killed by the police.

From the sole conspicuous exposition in which the explosive hero Jim is lying on the ground up to the bitter, tragic ending, teenage drama "Rebel Without a Cause" manifests energy and intensity that are, although changed, still impressive and too true even today. Nicholas Ray deserves praise due to his brave portrait of apathy, bewilderment and chaos of youth without a perspective while especially fascinating is the character of Judy: her devotion towards her father, whose attention she tries claim by wandering at night, is something that was lost in most of today's movies - in fact, when she hears that her mother is going to pick her up at the police station, and not her father, she gets terribly disappointed, whereas she keeps kissing him even though he openly tells her she is "too old for that" and slaps her - Natalie Wood plays this character marvelously and was nominated for an Oscar. Of course, James Dean became the real star of the film, playing the confused Jim who is disgusted by the world he is living in, for which he was nominated for a BAFTA as best actor. Even the sequence in the planetarium is magnificent: the professor talks about the last days and the end of the world, while the students regard it as symbolic, which is why the movie still works, even though the ending is extremely lethargic and some moments today seem rather over-the-top.
Grade:+++
Posted by Marin Mandir at 2:33 PM