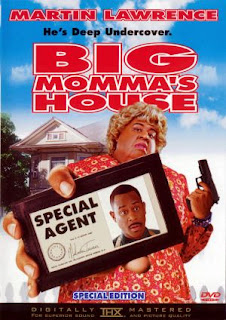 FBI agent Malcolm Turner manages to uncover Chinese mafia disguised as a Chinese. His new assignment is to find criminal Lester, and it would be much easier if he could spy on his ex girlfriend Sherry and her little son Trent. Malcolm thus disguises himself in her grandmother in order to be with them in the house. Sherry doesn't even suspect her grandmother is a man, thus leads her around the town, lets her help when one girl gives birth, etc. When Lester returns, Malcolm arrests him, takes his mask off and gains Sherry.

Martin Lawrence shamelessly copied "Mrs. Doubtfire", "Victor/ Victoria", "The Nutty Professor" and a whole bunch of other cross dressing comedies in the cheap and despairing "Big Momma's House" that has only one good moment - the main protagonist, FBI agent, Malcolm disguises himself as Sherry's grandmother - and from there on it's all downhill. Still, the movie became a huge hit. The beginning is still tolerable and will probably gain a few sympathies and allure the viewers to expect at least a mediocre copy, but the rest quickly becomes hardly bearable due to idiotic ideas. Among those curiosities that stand out is the sequence where Malcolm is hiding behind a curtain while the real grandmother is using the toilet and farts or when Malcolm, disguised as Big Momma, is forced to help bring birth to a baby. The story is full of overused cliches and ideas of the above mentioned films, occasionally nasty and stupid humor, embarrassing posture and coldness, with only a few good moments, like when Big Momma plays basketball. Nia Long is all right in her role, but her despair can be sensed in all the abundance of weak jokes.