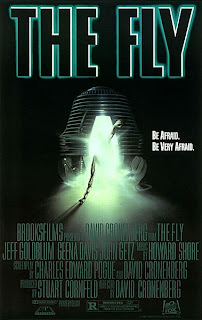 Young scientist Seth Brundle meets journalist Veronica at a party and brings her to his warehouse laboratory where he shows her his revolutionary invention, two 'Telepods' that can teleport mater from one place to another. Even though he is angered at first that she recorded their conversation, he allows her to make a coverage of his work. The two start a relationship. But Seth is frustrated because the 'Telepod' computer never manages to transport living creatures without mutilating them. He somehow repairs the problem and transports himself to try it out, but overlooks that a small fly also entered the chamber - thus the computer makes a fusion out of his genes and the genes of a fly. He slowly changes, becoming a mutant. Crazy and degenerated, he tries to merge himself with her, but fails and she shoots him on his own wish.

With the ferocious horror movie "The Fly", director David Cronenberg managed to achieve a great success, while the make up won an Oscar. The movie enjoys a high reputation and cult status, but putting the fabulous make up aside, it has little to offer. Cronenberg uses the tragic collision of man and fly just to scare the viewers in a cheap way and provoke their disgust, while some deeper psychological and philosophical insights are absent. The first half an hour of the film, which is the 'normal' part of the story, is bland since the relationship between Seth and Veronica is routinely written: for instance, we are never revealed with why she would all of a blue fall in love with him. The only ingredient that rings true there is the small role of Veronica's jealous macho boss, Stathis.

The constant gradation of suspense by Seth's slow transformation into a terrifying mutant in the second half is well achieved and Jeff Goldblum's performance is great, for which he won the Saturn award as best actor in a Fantasy film, yet the authors failed to go into the human side of the story - for instance, it's neat that Seth's arm catches a fly in a reflex while he is asleep, yet the super powers potentials were thrown mostly down the drain. Sadly, most of the transformation is just wasted to show Seth's ears or teeth falling off. Some critics see the story mirroring a few allegorical themes, like AIDS infection or paraphrasing Kafka's "Metamorphosis", and one can to a certain extent detect them in the film, but to a bigger extent they mostly seem just like side notes crammed into a trashy 'Frankenstein' concept. If there were at least some emotions present, even pathetic ones, it would have been a much better film, despite a shocking end. But this way they are obviously missing, and no effects can compensate for that.