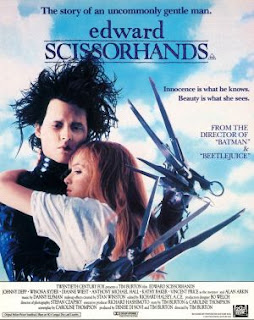 A small town. Peg is a saleswoman who sells make up from door to door. When she goes to a desolated mansion on the hill, she encounters a young lad, Edward - who has scissors instead of hands - and adopts him. Her husband and little son welcome Edward, give him clothes and employ him as their local gardener, since he can make great in hedge clipping. Peg's teenage daughter Kim is at first scared of him, but eventually begins to like him. When Kim's boyfriend Jim involves Edward in a theft attempt, it triggers a chain reaction in which the town people start despising Edward. He returns back to the mansion and, while trying to protect Kim, kills Jim.

Rarely was there ever such a gentle, symbolic allegory about handicapped people that graced the screen. Unlike other Tim Burton films that are just a gimmick for bizarre set design, "Edward Sciccorhands" actually has a very useful story neatly incorporated into it's surrounding: the title hero is a tragic character, a person who can't touch people without hurting them, can't receive love and acts like a reactionary catalyst when entering the idyllic suburban town, dissolving their community, whereas Johnny Depp plays him marvelously - just like Chaplin, he relies completely on facial expressions, hardly ever talks since the other characters talk for him, and was thus rightfully nominated for a Golden Globe as best actor in a musical or comedy.

The story is rich with little details and love for the characters that can be traced already in the beginning where Peg (Wiest) sells make up products from door to door, and since she lives in that town and everyone knows her, it's all the more embarrassing for her, which is probably why she is the only person that would take Edward under custody - they are both outsiders. There are some big flaws here, though, that shouldn't be in a fairy tale: the movie is at times directed with a clumsy hand, the howling music can get annoying, the flashback scenes of Edward and his creator are pointless, the characters are poorly developed, many ideas are repetitive while the finale is terribly melodramatic and crammed with blatant accusations. Still, some moments are truly brilliantly directed - for instance, the scene where dad and son look in awe at Edward who triumphantly clipped a marvelous shape of a Dinosaur from a hedge, accidentally synchronised in tune to the cheering crowd from a radio game - while Burton was never so emotionally attached to a story.