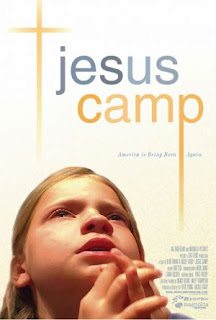 Becky Fischer leads "Kids on Fire", a summer camp in North Dakota, where Evangelical kids are taught to discover their prophetic role and strengthen it. The Pastors teach them that their generation will be crucial for the return of Jesus Christ and should become "the Army of God", that evolution doesn't exist, that abortion is evil, that they should become radical Christians...Among the kids are also Levi, Victoria and Rachel. Later on they go visit pastor Ted Haggard and let the under aged kids wonder through the streets and try sell their message to random strangers.

Directors Heidi Ewing and Rachel Grady crafted the critically acclaimed documentary "Jesus Camp" trying to - more or less -objectively present the movement around pastor Becky Fischer, and to certain extent the impact that it has on underaged kids, adding also the other, critical side to the events through small inserts of secular radio host Mike Papantino. Using the religion to a certain extent is useful when children are that way planted with moral values, for instance as it is said in the film that they shouldn't swear, or respect the older or show compassion. Nobody ever said having faith in God is something wrong - having faith is wonderful. But when the faith is filtered by a human institution, religion, and presented in such a distorted shape that they are thought that "global warming doesn't exist", or that "they should be admiring the Palestinians who teach their children from the age of 5 to give their life for God" or to "become radical", then that's already fanaticism and poisoning the young minds with dirty ideology. People can have the purest ideas and intentions, but when they use demonic methods to achieve them, then the goal becomes corrupt. The religious leaders of the camp have a right to oppose abortion, but why present such a heavy and difficult issue to innocent kids aged 5-10? Having seen all the kids have been through, it's a wonder if they don't suffer from some psychological damage.
The irony is, in the process, the camp actually breaks a few of the Ten Commandments: when the kids worship the cut board of their idol George W. Bush, they break the Commandment "You shall have no other gods before me" and "You shall not make for yourself an idol". When Fischer yells: "This means war!", she breaks the Commandment "You shall not make wrongful use of the name of your God". When a pastor tells the kids that their generation will be the crucial for the return of Christ - and he doesn't know that since God didn't tell him the exact date, it may be in hundreds and hundreds of years from now - he breaks the Commandment "You shall not bear false witness", aka not lie. The movie is also filled with satirical contradictions, obviously subtly placed in the editing room by the authors, like in the scene where Fischer prays for the use of technical devices, like the microphone, she embraces technology and science, but when science is suppose to teach her something about this world, then she blocks it out. Following the word of God is one thing, but when Becky Fischer drills and conditions the kids to do whatever she tells them to, then they follow the word of Becky Fischer. To quote the words of pastor Ted Haggard, who was later caught with a male prostitute: "I think I know what you did last night". A few occasional flaws bring the movie down, but it's very well made and shocking - if this was 'Mohamed Camp', it would have been banned immediately - and was nominated for an Oscar as best documentary.
Grade:+++
Posted by Marin Mandir at 2:06 PM