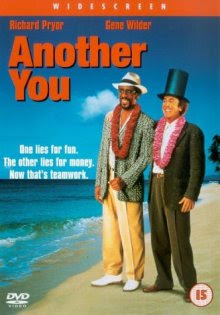 Eddie is a small time con artist, but since he is forced to do 100 hours of social work he decides to take care of some guy called George. But that George spent 3 years in a mental asylum and is a pathological liar. On the streets, George meets some man who mistakes him for a millionaire called Abe. Eddie immediately persuades George to play Abe, and thus they leave for the diner in the mansion of Mrs. Elaine, who claims to be Abe's wife. Then the accountant Dipsy shows up and gives George money, but tells Eddie the truth - everyone knows George isn't Abe, but pretend he is so that his beer factory won't get shut down. Then Dipsy orders Eddie to kill George, but he refuses, reports the case to the police and takes over the factory with George.

The critics hate comedy "Another You" but it isn't that bad as it's negative reputation suggests, even though it has a fair share of embarrassing moments. It marks the last teaming of comedians Gene Wilder and Richard Pryor - Pryor was visibly suffering from multiple sclerosis at that time and it shows on film, no matter how hard they tried to hide it, since he had trouble moving, making it hard to laugh at his performance which leaves a bitter taste, but the cheerful Gene Wilder is truly the best in the cast and manages to save a few gags, like in the scene where his character George says: "When I start to lie, all Hell breaks loose!" or when he starts convincing everyone at the diner that he truly is the rich Abe and making up adventures in the plane some 30.000 feet above the ground, while Mercedes Ruehl manages to give her best shot in the poorly written role as Elaine. Of course, the whole movie is sloppy and weak, yet it's hard to say that the prior Wilder-Pryor movies were anything more sophisticated, except that it's much more obvious here.