What Did You Do in the War, Daddy? 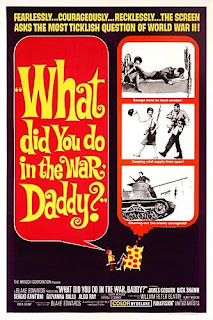 Sicily, '43. US Captain Cash and Lieutenant Christian get the assignment to capture village Valerno with their unit. To their surprise, the Commander of the Fascists, Oppa, immediately happily surrenders under the condition that they all arrange a celebration. Cash agrees under protest but then gets drunk the most and lands in bed with Gina, Oppa's girlfriend. When Oppa finds that out, he decides not to surrender. Since the generals from both sides observe the village via airplanes, Italian and American soldiers decide to act as if they are fighting, in order to win on time. When the Germans take both sides as hostages, they unite and fight against them. They disguise themselves as Germans, capture them and send them to the Americans.

War burlesque "What Did You Do in the War, Daddy?" is a small jewel of comedy, a movie so simple and yet so effective with it's childishly hilarious jokes: already from reading the absurd plot synopsis, you can sense that the story is perfectly set up for laughs, and it's execution is really well done, which is why director Blake Edwards started earning his title as 'master of comedy'. The opening is overstretched and convulsive, but the story quickly picks up on substance when it spoofs military cliches: it's very cynical when the US soldiers and their Captain Cash enter an Italian village in order to conquer it, but to their surprise the Fascist Commander Oppa happily surrenders under the condition that they are arrange a celebration, which ignites a great conversation with Cash ("Americans, do you surrender?"-"We? Never!"-"All right, then we surrender...But only tomorrow, after the celebration."-"Surrender now!"-"After the celebration."-"Surrender!"-"...You're such a strange Captain..."-"Yes, that's right! I'm strange, and now surrender!"). The plot may meander at times, but it's always refreshing with pure humor, from the scenes where the Italian and US soldiers are acting as if they are fighting up to the simply genius sequence where US soldiers hide because they are wearing Italian uniforms while the Italians who are wearing US uniforms have to stay and pretend to be Americans when Sargent Pott arrives (he asks one soldier what's his name and he, of course, doesn't speak English and mumbles something in Italian, while Christian tries to justify it with "war shock"). It's amazing how well the film works, shooting gags left and right, and thus it's a pity it's a forgotten classic.