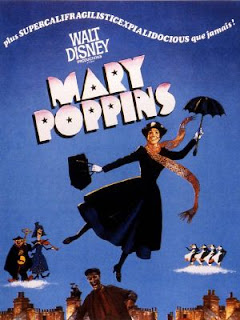 London. The Banks family already hired numerous nannies to watch out after their problematic children Jane and Michael. When a strong wind blows away the new candidates, a mysterious nanny arrives descending with an umbrella from the sky, Mary Poppins. She is very accessible to kids, which is why the father of the family has sympathies towards her. But she also has magic powers: she makes the children's' room clean up all by itself, she brings Jane and Michael into a world of animation and uses a chimney to introduce a chimney sweep. There is also her friend Burt. In the end, a change happens: the uptight father becomes a cheerful and fun person, while Mary leaves with her umbrella.

This opulent musical gained a negative reputation in some circles due to it's sweet tone, but those who properly watch it from start to finish will be pleasantly surprised with it's spark and style: such innocent films with pure heart, that still manage to be sharp at the same time, disappeared in modern times, while the real highlight is splendid Julie Andrews as the title heroine, who managed to win a Golden Globe, a BAFTA and an Oscar as best actress. The whole story is presented from the children's perspective (why would that be a flaw?), but it contains also some serious and true messages about life, especially about children who need loving care and adequate intellectual stimulation to stop acting problematic, whereas the story impresses with funny visual jokes, mostly presented in fast-forward motion (the wind blows all nannies away from the fence; Mary and the children snap their fingers to start the process of the room cleaning itself up by magic) and even lines (the phrase 'Supercalifragilisticexpialidocious' became one of the most quoted tongue twisters ever). The trip into the cartoon world wasn't so grand, but the dance sequences and some moves are fabulous, while director Robert Stevens has such a simple approach that he manages to make this fun and touching film work down to a T.