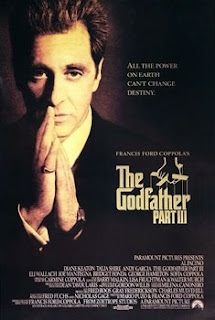 The now old Michael Corleone changed into a family loving man who wants to get out of the mafia and legalize his money. His foundation gives 100 million $ to the church for charity and then tries to deal with the Vatican to buy enough shares of the prestigious Immobiliare real estate company. The arranged deal is jeopardized though when the pope becomes sick and dies, and thus can't confirm it. Also, the impatient Vincent kills double crossing Joey Zasa and starts a relationship with Michael's daughter Mary. A Italian Lodge is conflicting with the Corleone's interest with Immobiliare. Vincent orders his men to kill all of Corelone's enemies during an opera where Anthony is performing. But the killers also kill Mary. Michael dies alone as an old man in Sicily.

16 years after the 2nd film, Francis Ford Coppola finally gave in and directed the 3rd and final film of the "Godfather" saga, "The Godfather Part III", an extremely hyped and disputed film that some have characterized as a worthy conclusion to the trilogy while others have denounced it as a movie that shouldn't have never been made in the first place. The stumbling point to many fans was the decision to show Michael Corleone as an aging mobster who suddenly changed his mind and became a family loving person who wants to leave the mafia, yet it's a legitimate choice from Coppola and Puzo who wanted to show how he became aware that it doesn't pay out to risk his children anymore to keep on with his work. The end is a haunting and depressive message that crime doesn't pay out and that no matter how rich someone can be, he can end up alone.

Despite a few tedious, banal and heavy handed moments (one of the four people carrying the statue of Virgin Mary on the street turns out to be an assassin who shoots with his gun, and thus drops the statue to the floor), the majority of the film is handled with a sure hand and a confident style that covers up some empty scenes, while the most astonishing detail is that the story even unbelievably plays with fact and fiction when it used some real-life events, the suspicious death of Pope John Paul I (here a result of poisoning) and the Papal banking scandal (here a result of the fact that the Corleones wanted to make a business deal with the Vatican in order to legalize their money). The most negative comments were aimed at the performance by Sofia Coppola who played Mary Corleone, though that was unjustified - admittedly, her performance isn't perfect, which is obvious in the sequence where she is talking with Al Pacino at the table, since she delivers her lines mechanically while he says them all naturally - yet she delivered a solid performance, and since her role isn't that big the accusations that she "ruined the film" are baseless.